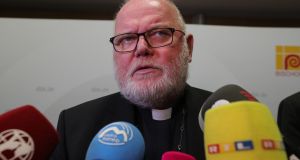 German investigators say they were left “shaken” by the scale of clerical sex abuse and institutional cover-up in Germany’s Catholic Church.

Speaking on Tuesday at the presentation of a report into decades of sex abuse of children in the Church, Cardinal Reinhard Marx, head of the German Bishops’ Conference, said the 366-page document marked a “shameful episode we cannot deny”.

“For too long in the Church we have looked away, denied, covered up and didn’t want it to be true,” Cardinal Marx told a press conference.

Two weeks after a summary of the report leaked, the lead investigator, Prof Harald Dressing, said that in his 30-year career as a forensic psychiatrist he had never encountered anything like what he had found in Church files.

“The scale of sexual abuse in the German Catholic Church, and the actions of those responsible, left me shaken,” he said.

His team’s research said there “were and are specific structures that may favour abuse” in the Church, citing the celibacy rule, ambivalent Catholic teaching on homosexuality, “sexually immature” clerics and others “in denial over homosexual tendencies”.

The report detailed behaviour familiar to Irish ears: 60 per cent of alleged abusers escaped punishment and were often transferred without informing their new parish.

Researchers said it was highly likely that sex abuse of children by religious was ongoing.

About 70 per cent of clerical sex abuse victims referred to in the report were boys under 13. Researchers accused suspects of abusing the sacrament of Confession to admit crimes, knowing the seal of confessional meant they would not be reported.

The report was commissioned by Catholic bishops after revelations of child abuse broke in 2010. Denied direct access to archives, researchers devised and evaluated abuse questionnaires completed by diocesan officials and lawyers who viewed 38,000 personnel files.

The indirect access to documentation – some of which was incomplete or manipulated – and the exclusion of religious orders meant this study was only “the tip of the iceberg”, investigators said, urging further independent research at all Church levels.

Researchers found an abuser quota of about 5 per cent among priests in parishes, a figure which remained constant even as priest numbers dropped. The abuser rate fell to 1 per cent in the case of deacons, many of whom are married.

Researchers also combed criminal records and set up an online survey for abuse survivors. According to the report, survivors want Church leaders to go beyond expressions of regret and show “signs of real remorse and an authentic admission of guilt”.

Looking forward, researchers were critical of a lack of co-ordination among bishops in Germany’s 27 Catholic dioceses, in particular on the issue of compensation.

Cardinal Marx said the report represented a “decisive turning point” for the Catholic Church in Germany. He declined to say whether it would bring about significant change on clericalism, celibacy or homosexuality – all flagged as uniquely problematic in the Catholic abuse context.

The cardinal, who is also Archbishop of Munich, said he had already presented a summary of the report to Pope Francis ahead of a meeting of world bishops next February on clerical abuse.

Germany’s state envoy for sex abuse of children, Johannes-Wilhelm Rörig, has urged the Church to pay compensation to the victims and demanded state access to archives to allow state prosecutors examine all allegations.

“There are no names of bishops responsible for covering up and perfecting the system of sexual attacks for decades,” said Matthias Katsch, spokesman for a leading survivors’ group. “This report is only a sliver of the reality.”