Mass cancelled in Sri Lankan capital due to threat 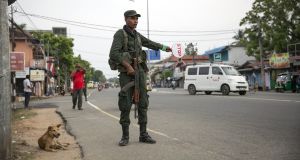 The decision comes in the wake of the deadly Easter bombings on churches and hotels.

Sri Lankan security forces have said they were maintaining a high level of alert as intelligence reports indicated the militants were likely to strike before the beginning of the Islamic holy month of Ramadan, which is due to begin on Monday.

And the US ambassador to Sri Lanka said this week that some of the Islamist militants behind the Easter bombings that killed over 250 people were likely to be still at large and could be planning more attacks.

“The security situation has not improved yet,” Colombo Archdiocese spokesman Edmund Tillekeratne said on Friday.

Colombo’s Archbishop, Cardinal Malcolm Ranjith, said on Thursday that a “highly reliable foreign source” had warned of an attack on a prominent church. He also requested that all private Catholic schools in and around the capital remain shut for now.

Schools are due to reopen again on Monday, and the Education Ministry has said at least one police officer will be posted at each institution to protect children.

Sri Lankan authorities, who have come under fire for not acting on repeated warnings about attacks, did not immediately respond to a request for comment.

Sri Lanka has previously said that they suspect the attackers had international links, although the precise nature of those connections are not known.

Islamic State has claimed responsibility for the coordinated bombings in Sri Lanka, but has not give evidence for its claim.

The US Federal Bureau of Investigation and Interpol, as well as other undisclosed foreign agencies, are helping Sri Lanka with the probe.

Local intelligence officials believe that Zahran Hashim, a Tamil-speaking preacher from the east of the Indian Ocean island country, could have played a key role in plotting the Easter bombings. Officials believe he was one of nine suicide bombers. – Reuters