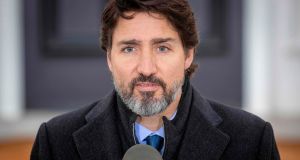 Russian comedians Vovan and Lexus have struck again, this time pranking Canadian prime minister Justin Trudeau in a phone call during which he believed he was talking to climate change activist Greta Thunberg.

Vladimir Kuznetsov and Alexey Stolyarov, who call themselves Vovan and Lexus, released a recording of the phone call this week, in which they counsel Trudeau about world politics and request a chance to meet some of the characters from South Park – at which point the penny drops.

Previous targets of Vovan and Lexus include Elton John, who they claim to have fooled by pretending to be Russian president Vladimir Putin keen to talk about gay rights.

During the 10-minute call, a third person – playing the teenage climate activist – tells Mr Trudeau she is worried about a “growing international crisis and anticipation of the world war”.

The call was made in January, days after the Iranian government shot down a Ukrainian passenger jet, killing the 176 people on board.

“You are adults but you act like children,” she says. “We can create a world where there is a place for everyone. For white and black. Christians and Muslims. Trump and Putin. For you and me. For Boris Johnson. For Corbyn. For Terrance and Phillip, who are also known in your country.”

The last two names refer to Canadian characters from the show South Park.

“No, that is exactly, exactly the right perspective,” Mr Trudeau responds.

After he expresses his belief that Ms Thunberg’s 2019 visit to Montreal ahead of the country’s federal election “helped define” the outcome in terms of climate change, Ms Thunberg interrupts to say, “But leave Nato. Drop your weapons. Pick flowers. Smile at nature.”

A diplomatic Mr Trudeau responds without pause: “I also dream of a world in which soldiers are not necessary, but we don’t live in that world yet, unfortunately.”

Fake Greta then accuses Meghan Markle of “manipulating” Prince Harry – the pair were in the process of deciding whether to live in Canada – before asking whether Mr Trudeau can introduce her to Terrance and Phillip.

“I would be happy – I’ll ask my team to try and figure out how we can connect you,” he says. “Because I don’t have their direct coordinates with me now.”

The penny finally drops when she asks again whether it would be possible.

“Wait, Terrance and Phillip, where they not in South Park?” he asks. “I don’t personally know them. I believe they are South Park parodies of Canadians,” he says, before politely ending the call. – Guardian