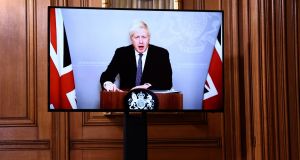 Britain’s prime minister Boris Johnson: “This will be still a hard winter, Christmas cannot be normal and there is a long road to spring.” Photograph: Henry Nicholls

Shops, gyms, personal care and the leisure sector will reopen across England next week under a new three-tier system of coronavirus restrictions announced by Boris Johnson on Monday. The new measures, which will replace a national lockdown from December 2nd, will remain in place until next March.

“I really am now assured things really will look and feel very different indeed after Easter and that idea of and end goal or date is important because at last – if the promise of the vaccines is fulfilled,” Mr Johnson said in a press conference from Downing Street on Monday night.

“We do have something to work for, a timescale, a goal around which businesses can begin tentatively to plan and with luck and with hard work we will be seeing improvements before then but for now the problem is not a shortage of hope or a lack of optimism, not with the amazing news that we are getting from the laboratories in this country. The challenge now as we face this difficult winter ahead is to fight down any over-optimism, to master any tendency to premature celebration of success.”

Mr Johnson said his government was working with the devolved administrations in Edinburgh, Cardiff and Belfast towards a plan that would allow up to three households to meet over Christmas. Under the new three-tier system in England, regions under higher tiers would see bars and restaurants operate under restricted conditions or be closed except for takeaway.

The new system adopts a “wet pubs” concept under which bars in some places will only be allowed to operate if they serve substantial meals with drinks. Gatherings will still be limited to six people, except for weddings and funerals, and people will be obliged or encouraged to work from home where possible.

Under all but the highest level of restrictions, spectators will be allowed to attend sports events and live performances with social distancing. And personal care services including hairdressing will be allowed to operate under all tiers.

“This will be still a hard winter, Christmas cannot be normal and there is a long road to spring,” Mr Johnson told the House of Commons on Monday.

“But we have turned a corner: and the escape route is in sight. We must hold out against the virus until testing and vaccines come to our rescue and reduce the need for restrictions. Everyone can help speed up the arrival of that moment by continuing to follow the rules, getting tested and self-isolating when instructed, remembering hands, face and space, and pulling together for one final push to the spring, when we have every reason to hope and believe that the achievements of our scientists will finally lift the shadow of the virus.”

Labour leader Keir Starmer said the return to a tiered system was risky because it had not worked before the imposition of the lockdown this month. He said only a fraction of those asked to self-isolate were doing so and that the test, trace and isolate system needed to be fixed.