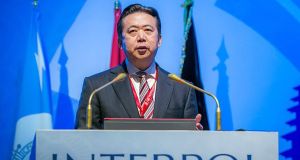 French authorities have opened an inquiry into the disappearance of Meng Hongwei, the Chinese head of international police agency Interpol, after he returned to his home country, a person familiar with the situation said.

Mr Meng travelled to China in September, according to the person, who added that Mr Meng’s wife had reported him missing to the authorities. The investigation has been opened by the prosecutor’s office in Lyon, the French city where Interpol is based.

The South China Morning Post reported on Friday that Mr Meng had been taken away by “discipline authorities” as soon as he landed in China. China’s Ministry of Foreign Affairs did not immediately respond to a request for comment.

Interpol said in a statement it was aware of media reports in connection with the “alleged disappearance” of its president. It said the reports were “a matter for the relevant authorities in both France and China” and declined to comment further. Interpol also noted that it is the secretary general who was in charge of the day-to-day running of the organisation, not the president.

Mr Meng, who was elected head of Interpol in 2016 and is scheduled to serve until 2020, is also China’s vice minister of public security. Until April, he also served on the ministry’s party committee and as head of the Chinese bureau of Interpol.

He was the first Chinese head of Interpol, the organisation the facilitates international police co-operation, and his appointment prompted some human rights organisations such as Amnesty International and Human Rights Watch to raise concerns that Beijing could use Interpol to arrest dissidents and refugees abroad.

Mr Meng held sensitive posts in China as deputy director of the State Oceanic Administration and director of the Maritime Police Bureau, both of which would have put him in positions of responsibility as China expanded its territorial claims in the South China Sea and the East China Sea.

He was first promoted to vice minister in the powerful Ministry of Public Security under Zhou Yongkang, the former security tsar who was the chief target of Chinese president Xi Jinping’s anti-corruption purge.

Under Chinese law, people can be detained by police for up to two months without charge or access to a lawyer or their family. However, the so-called “discipline authorities” of the ruling Communist Party, whose authority supersedes the law, are not obliged to adhere to those rules.

Since 2014, amid an intensifying anti-corruption campaign at home, China has used Interpol to seek the return of what Beijing claims are corrupt officials who have fled overseas. Human rights advocates have feared China might also use Interpol to track down dissidents abroad. – Copyright The Financial Times Limited 2018