How Putin and Trump have eroded truth and rule of law 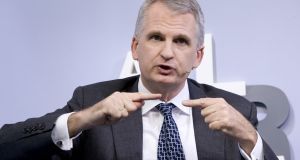 US-American historian Timothy Snyder: Donald Trump and Vladimir Putin never acknowledge lies. “They don’t believe that there is actually a truth out there. [They] crowd factuality out of the public sphere . . . You call the journalists the liars and then it’s in that confusion that you govern.” Photograph:Ulrich Baumgarten via Getty Images

Does Donald Trump pose a threat to democracy? Timothy Snyder says yes. In February, a few weeks after the presidential inauguration, the Yale historian published On Tyranny, a slim volume – just 128 pages – setting out 20 ways to resist that threat, based on Snyder’s own understanding of how anti-democratic and anti-enlightenment forces can rise to power.

As one of the leading thinkers on the causes and consequences of 20th-century totalitarianism, Snyder brought 20 years of deep research to the task. His 2010 book, Bloodlands, explored how 14 million people were murdered under Stalinism and Nazism in Eastern Europe between 1933 and 1945. In his 2015 work, Black Earth: The Holocaust as History and Warning, he argued that we risk misunderstanding and forgetting the true circumstances which led to the annihilation of millions of Jews.

Visiting Dublin for a talk at UCD’s Centre for War Studies in the school of history, Snyder tells me many of the ideas in On Tyranny are simply forms of political hygiene.

“Like don’t spend too much time with the screens,” he says. “Spend more time with books. It doesn’t seem like political advice but it actually does certain things to our sense of optimism and helps us beat back the sense of incessant bad news. It gives us a vocabulary for characterising what’s happening to us so we’re not caught in the echo chamber of the day-to-day.”

“I’m a historian of the Holocaust and Soviet terror and other kinds of dark politics,” he says. “I have this overwhelming sense that we in the West spent a generation convincing ourselves – and what’s worse the generation to come – that nothing could really change, that history was over. And I think it’s exactly the opposite.”

Much of what is now happening in the US was already occurring in Russia or Ukraine while he was working in those countries, he says. It was very easy for Americans and western Europeans to misread the retreat of democracy in those countries as something that couldn’t happen here, but Snyder believes we should see them as harbingers of where our own societies are headed.

“A number of things which have happened in Russia – like concentration of wealth or concentration of the media – are more like our future than anything else,” he says. “They show the logical conclusion of certain trends in our societies. With America in a sense it’s already happened. We let our social inequality get to be comparable to Russia’s. And that’s one of the reasons why Russian-style political propaganda turned out to work.”

“We take for granted the office of domestic terrorism has been renamed the office of Islamic terrorism even though three-quarters of the terrorist attacks in the United States are carried out by right-wing American citizens. We take for granted that his family is there, which is just completely inappropriate. There were a lot of things that people thought were impossible which have already happened.”

Even the optimistic version of what’s happening is very bad, he says. “The good version is something like the FBI is keeping watch on the generals and the generals are keeping watch on Trump. Nobody thinks it’s any better than that. But that’s not the constitutional checks and balances.” However, he does find cause for optimism in a newly energised opposition and in the renaissance of investigative journalism. “Thanks to them we actually have some idea about what’s going on.”

And the clown car analogy is exactly what people said about the early years of Mussolini and Hitler, he says. “Hannah Arendt talks about vulgarity and totalitarianism, that the way that leaders speak changes people’s – I won’t hesitate to say it – souls. It changes what people think is right and wrong, acceptable, unacceptable. And that does damage. It really does hurt the society.”

Some may see these comparisons with the 1930s as hysterical or exaggerated, but Snyder isn’t saying the two moments are identical; his argument is that we should learn from the parallels with the past to understand the present moment and a governing style which he describes as “oligarchical impotence”.

“You govern by the repetitive generation of crisis, whether it’s North Korea or Iran or whether it’s African-Americans or whether it’s blaming Puerto Ricans for the hurricane. Over and over again you push on the wounds of your own country,” he says. “You provoke other countries and you do it regularly because that regular cycle of emotion is what you have. You don’t have policy, you just have that. And so what can seem like just random incompetence is much more adventurous. I think it’s actually a new way of doing politics.”

But many of the phenomena we think of as new – like fake news or post-truth – have in reality been around for a long time. Eighty years ago, Hannah Arendt wrote that the ideal subject of totalitarian rule was not the convinced Nazi or the convinced communist, but people for whom the distinction between fact and fiction and between true and false no longer existed.

“There’s so much that Arendt had right,” says Snyder. “When people hear the word totalitarianism, they think, ‘Oh that’s an era gone by. That’s the Red Army fighting the Wehrmacht’. But what she had in mind is much more how minds change, along with modernity. That word ‘fiction’ that she uses is a word that I find very appropriate. We are living in an age where leaders are literally appearing across a horizon of fiction.

“Vladimir Putin was chosen in the Kremlin in 1999 by a group of men who were trying to find a successor to Yeltsin. And the way they did it was they had a public opinion poll about which Russian character on television was most popular. And then they tried to find the person in real life who was most like him. And then Donald Trump, who in real life was a failed real estate developer, is rescued by Russians who are close to Putin.

“They help him build buildings. He doesn’t actually ever do any work. And then on television he plays a character who’s a successful real estate developer which is a fictional role because he’s not successful. And on the basis of that television role he then becomes president of the United States. So you have one person leaping across this membrane of fiction, helping another person leap across this membrane of fiction.”

A key point that both Putin and Trump share is that when they lie they never apologise. “They never acknowledge that they’ve made mistakes or lie because they don’t believe that there is actually a truth out there. It is not just a habit. It’s a policy to try to crowd factuality out of the public sphere. You lie all the time. You call the journalists the liars and then it’s in that confusion that you govern. Because if people don’t believe that there is truth, they think they’re cynical, they think they’re sophisticated but in fact they’re completely impotent. Because without truth or without facts we can’t co-operate, we can’t have civil society, we can’t have opposition, we can’t have resistance. Without trust we can’t have the rule of law.”

Listen to Hugh Linehan’s interview with Timothy Snyder on the Irish Times Inside Politics podcast. irishtimes.com/podcasts