WHO raises alarm over widespread and enduring damage of Long Covid

The World Health Organisation (WHO) has raised the alarm over growing evidence of the disabling after-effects that Covid-19 can have on people who previously had no health complaints. 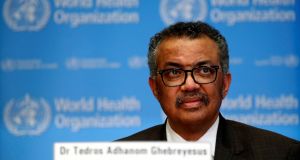 The World Health Organisation (WHO) has raised the alarm over prevalent cases of enduring damage to the health of Covid-19 survivors of all ages, including in those who experienced only a mild initial bout of the disease.

Growing evidence of the disabling after-effects that the virus can have on people who previously had no health complaints should add urgency to efforts to contain the virus as it infects record numbers of people in a dramatic surge across Europe and the US, the UN body said.

Figures on how many people are afflicted by so-called Long Covid are still emerging, but the number was estimated in a recent study at about one in 10 survivors aged under 50, and effects range from organ damage to neurological damage, profound exhaustion and shortness of breath.

“What’s clear is that this is not just a virus that kills people. To a significant number of people, this virus poses a range of serious long-term effects,” WHO director general Tedros Adhanom told a media briefing.

“It really reinforces what a dangerous virus Covid-19 is,” Dr Adhanom said. “It also reinforces how morally unconscionable and unfeasible the so-called ‘natural herd immunity’ strategy is.”

Prof Paul Garner, an infectious diseases epidemiologist at the Liverpool School of Tropical Medicine, shared his experience of suffering seven months of debilitating illness since catching the virus in March.

“I was fit and well and I assumed . . . I would be able to brush it off,” Prof Garner said. “I never thought I would have seven months of my life wiped out by this virus.

“Post-viral syndromes are not new, but what we have here is a huge scale of people who are suddenly disabled . . . a level of disability that hasn’t been seen this century, and last century it was seen in the world wars only.”

The solution is for countries to double their efforts in implementing virus control measures that have been proven to work, including universal mask-wearing, ventilating buildings to reduce shared air, avoidance of close contact in poorly-ventilated places, and the identification and strict isolation of the contacts of positive cases, WHO experts said.

European countries including France and Germany have resorted to tough restrictions like those seen in the spring to curb the rapid spread of the disease as it threatens to overwhelm hospital wards and intensive care units. The EU announced it would fund the transfer of patients across borders to avoid healthcare systems in the worst-hit countries buckling as total infections in the continent surpassed 10 million.

The exponential spread of the virus after anti-Covid-19 measures were loosened, and many European governments encouraged citizens to resume ordinary activities during the summer, has forced a U-turn among policymakers in Europe to support reimposing nationwide restrictions to get the virus under control.

“Given the very dynamic situation in all of Europe, we need to equally reduce contact in almost all European countries,” Germany’s health minister Jens Spahn told journalists after he chaired a video conference of EU health ministers.

EU health commissioner Stella Kyriakides echoed the call. “We need to pull through this, where needed, with restrictions on everyday life to break the chain of transmission,” she said.