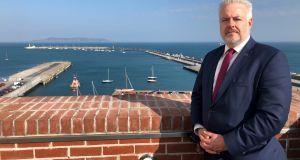 Welsh first minister Carwyn Jones fears Brexit negotiations will produce “a fudge” on a solution to avoid a hard Border in Ireland, pushing “the same arguments” between the EU and the UK into next year.

Speaking in Dublin, Mr Jones said he was concerned the talks on the so-called backstop would result in “some kind of temporary arrangement” involving the UK effectively staying in a customs union with the EU.

Mr Jones, the Welsh Labour Party leader who wants a soft Brexit, said a temporary EU-UK customs partnership “provides certainty for now but it is not a long-term solution”.

“I don’t think we will see a long-term solution over the course of the next month or two. But anything that buys more time, more breathing space, I’d welcome,” he said.

Mr Jones said Irish haulage companies had told him of the risk from Brexit to Irish transportation links with continental Europe through the UK “land-bridge”.

“Any kind of delay is bad. It is not just bad in terms of being able to export from Ireland into Britain but onward traffic going through Dover into the continent,” he said.

Mr Jones, who is stepping down as Wales’s first minister later this year, said he cannot see how to resolve the Border issue if the UK leaves the customs union and single market.

The EU and UK are locked in negotiations in Brussels this week trying to break the deadlock that has stalled a deal on Brexit over the inclusion of the backstop guarantee to maintain an invisible Irish border.

Officials familiar with the talks said the UK has yet to submit its expected written revised proposals on the backstop.

The discussions have focused on previous proposals which suggest continued temporary UK-wide membership of a customs union, rather than a specific customs union for Northern Ireland.

Progress is required by next week to avoid the talks unravelling.

Officials in Brussels said there had been a discernible intensification in the negotiations, with the crunch Brexit summit of EU leaders less than a week away.

On Wednesday EU chief negotiator Michel Barnier gave an assessment of the talks to a restricted meeting of the European Commission. And senior officials were warned to stand by for emergency meetings over the weekend.

National “sherpas” – senior officials co-ordinating preparations for political leaders – are expected in Brussels on Monday to lay the groundwork for the summit which opens next Wednesday.

UK chief negotiator Ollie Robbins, a close aide to British prime minister Theresa May, has been in Brussels for talks on the backstop.

Meanwhile, in a speech to European businesses in Brussels on Wednesday afternoon Mr Barnier reiterated the detail of his “de-dramatisation” proposals for checks on goods going between the UK and Northern Ireland under the backstop.

So, what is proposed?

Although animals and food would have to be checked on ferries because of strict EU health and safety rules, he said the checks could be minimal – “the scanning of bar codes on lorries” – while VAT and customs forms could be filled in at factories.

Among the issues still causing difficulties is reportedly the determination of British negotiators to time-limit the backstop guarantee. They are fearful that the UK could be forced to accept such an arrangement as a permanent fixture if it is unable to negotiate a future framework deal with the EU that provides the same level of protections to Northern Ireland.

An EU source said its negotiators are still making it clear that under the UK-wide customs union there would be a need for complex border controls between the UK and the rest of the EU at ports like Dover and Calais or Holyhead and Dublin.

Some 70 per cent of goods moving between Ireland and Britain pass through Welsh ports.