The Irish Times view on the National Maternity Hospital: stick to the timetable 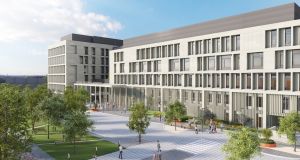 Minister for Health Simon Harris has reiterated his commitment to the development of the new €300 million National Maternity Hospital on the St Vincent’s site at Elm Park in Dublin.

Minister for Health Simon Harris has reiterated his commitment to the development of the new €300 million National Maternity Hospital on the St Vincent’s site at Elm Park in Dublin.

This is a welcome reassurance from the Minister but it needs to be followed swiftly by action to ensure that the timetable for the building of the new hospital does not slip as happens so often with large public building projects.

The Minister issued his commitment to the project in response to the deputy chair of the Holles Street hospital, Mr Justice Nicholas Kearns, who said at the weekend that approval for commencement works on the project had not been given by the Department of Health.

The retired judge said work on the pharmacy and car park had to get under way by the end of the year under European energy legislative requirements for new buildings – and that if it did not happen the whole project would effectively fold, and everything would go back to square one.

The former president of the High Court said this was a cause of very grave concern in Holles Street and that that concern was shared in St Vincent’s. He said it would be an absolute tragedy for the women of Ireland if the project were to be delayed in such a way that its viability was undermined. An Bord Pleanála granted planning permission for the construction of the €300 million maternity hospital on a site in the middle of the St Vincent’s hospital campus back in August 2017.

In response the Minister said he was absolutely committed to the delivery of the maternity hospital relocation project and he hoped to be in a position to give the green light to it by the end of this year.

Given that the appropriate site was selected, a steering group put in place and planning permission granted well over a year ago, the question must be asked about why it is taking so long for the Department of Health to give the go-ahead.

The Minister will not be forgiven if he fails to live up to his commitment to give the project the go ahead in the very near future.