A 500km dust band traversed across much of south-east Australia Thursday (November 22). Authorities halted flights and issued a public health alert. The dust storm was caused by strong winds in a low pressure system that blew clouds of dirt. 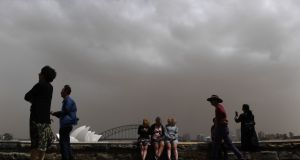 Tourists take photographs against the backdrop of the Sydney Harbour Bridge and the Sydney Opera House as a dust storm descends on Sydney. Photograph: Dean Lesins/EPA 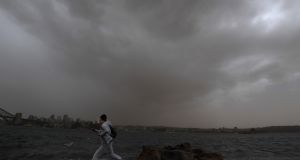 A dust storm that has swept across drought-stricken parts of New South Wales has shrouded Sydney’s landmarks and sparked an air quality warning from the State Government. Photograph: Dean Lesins/EPA

The country’s biggest city was blanketed in thick haze on Thursday morning as the storm front, caused by strong winds whipping up dust in drought-affected areas, made its way through the city. By late afternoon skies over the central business district were much clearer.

Air quality was rated as “very poor” in the east and southwest regions of the city and “hazardous” in the northwest by the state government’s environment department, which warned people with heart or lung disease to stay indoors as much as possible.

A similar weather event hit back in 2009, as a dust storm blanketed the city in an orange glow and caused the state government to lift its air quality warning to “hazardous.”

Australia is the driest inhabited continent on the planet and farmers in parts of the country have been struggling amid severe drought conditions for much of the year.–Bloomberg