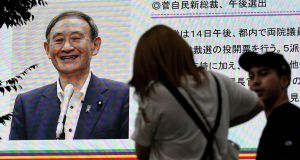 Pedestrians walk past a screen showing a news report on Yoshihide Suga on Monday. Photograph: EPA

Yoshihide Suga is poised to become Japan’s prime minister after he was comfortably elected to lead the ruling party following the resignation of Shinzo Abe.

Liberal Democratic party (LDP) MPs from both houses of parliament and representatives from prefectural party chapters voted overwhelmingly for Mr Suga, with the Abe loyalist emerging from the poll on Monday with 377 of the 534 votes, well ahead of Fumio Kishida, a former foreign minister, with 89 votes, and Shigeru Ishiba, a former defence minister, with 68.

Mr Suga, who has been the public face of the Abe administration during almost eight years as the government’s top spokesman, will officially become prime minister after the LDP-controlled lower and upper houses vote on his appointment on Wednesday.

The 71-year-old son of a strawberry farmer from rural northern Japan quickly emerged as the favourite to replace Mr Abe, who announced his resignation last month on health grounds, after securing the support of major LDP factions.

Promising to form a cabinet that “works for the people”, Mr Suga referred to his background in accepting the party’s nomination as leader, saying he had “started from zero”.

“With this background, I was able to become the leader of the Liberal Democratic party, with all its history and tradition,” he said. “I will devote the whole of myself to Japan and the Japanese people.”

Analysts said Mr Suga had benefited from the controversial decision to limit votes to MPs and local chapter delegates, and exclude more than 1 million rank-and-file members, among whom Mr Ishiba had consistently come out top in opinion polls.

Mr Abe told MPs he was “handing the baton” to Mr Suga, saying of his former spokesman: “We can count on him.”

Mr Suga’s most urgent task will be to sustain a recent fall in daily coronavirus cases while attempting to steer the world’s third-biggest economy out of a prolonged recession, worsened by the pandemic.

He must also work with Tokyo organisers and the International Olympic Committee to devise a plan to rescue next year’s summer event, which has already been postponed for a year because of the coronavirus outbreak.

Mr Suga will be confronted with issues Mr Abe failed to address during his long period in office, including Japan’s ageing population, low birthrate and poor record on gender equality.

Mr Suga, who has admitted he lacks diplomatic experience, is widely seen as the Abe continuity candidate, a label he did little to dispel during his leadership bid. His predecessor’s economic policy – a combination of huge government spending, ultra-easy monetary policy and structural reforms – would remain untouched, he said ahead of the vote.

Mr Suga’s landslide victory has fuelled speculation that he could attempt to capitalise on his popularity with a snap election next month to boost his chances of winning a full three-year term when the LDP holds a leadership vote next September.

Taro Aso, the finance minister, was the latest senior LDP figure to suggest that a general election was imminent. “The next administration will likely face criticism for being formed without a public mandate,” Mr Aso said in a speech on Sunday, according to the Kyodo news agency.

“If that’s the case, I feel like (the new prime minister) is going to dissolve the lower house.”

Mr Suga has refused to be drawn on the prospect of an early election, telling reporters at the weekend that his priority was striking a balance between preventing fresh Covid-19 outbreaks and encouraging economic activity. – Guardian