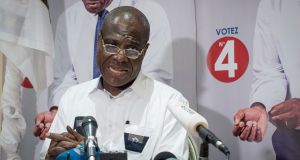 Democratic Republic of Congo’s government cut internet connections and SMS services across the country for a second straight day on Tuesday as the country nervously awaited results from the weekend’s chaotic presidential election.

Both the opposition and ruling coalition said on Monday they were on track to win after a turbulent election day on Sunday in which many Congolese were unable to vote due to an Ebola outbreak, conflict and logistical problems.

Barnabe Kikaya bin Karubi, a senior adviser to President Joseph Kabila, said internet and SMS services were cut to preserve public order after “fictitious results” began circulating on social media. “That could lead us straight toward chaos,” Kikaya said, adding the connections would remain cut until the publication of complete results on January 6th.

The signal to Radio France Internationale (RFI), one of the most popular news sources in Congo, was also down, and the government withdrew the accreditation of RFI’s main correspondent in the country late on Monday for having aired unofficial results from the opposition.

The various moves reflected high tensions in Congo, where the long-delayed election was meant to choose a successor to Mr Kabila, who is due to step down next month after 18 years in power – and two years after the official end of his mandate.

Congo has never seen a democratic transfer of power, and any disputed outcome could lead to a repeat of the violence that followed the 2006 and 2011 elections and a wider security breakdown in its volatile eastern provinces. The opposition says the election was marred by fraud and accused Mr Kabila of planning to rule from the sidelines through his preferred candidate, former interior minister Emmanuel Ramazani Shadary.

Internal United Nations reports noted allegations of irregularities across the country. In some parts of eastern Congo’s North Kivu province, for example, militia fighters reportedly forced voters to select candidates from the ruling coalition, they said. In other places, the UN received reports that security forces intimidated voters to choose ruling coalition candidates. The government and national electoral commission (CENI) said the election was fair and that any problems were minor.

In the eastern city of Goma, residents were on edge as they awaited the results. “If the results during the publication of the presidential results don’t reflect the truth . . . trouble will break out across the city,” said Fabrice Shweka, a Goma resident. The first partial results were initially expected on Tuesday but CENI spokesman Jean-Pierre Kalamba said they would not be ready until around Friday.

“We don’t want to release too many voting trends [before January 6th] because in our country we don’t have a population that has the same understanding [of electoral practice as in Europe],” he said. – Reuters