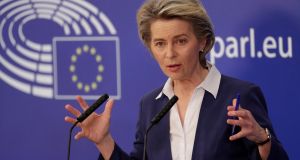 European Commission president Ursula von der Leyen: “I am fully aware of the sensitivity related to the protocol on Ireland and Northern Ireland.” Photograph: Olivier Hoslet/EPA

European Commission president Ursula von der Leyen has expressed regret over the use of the politically sensitive article 16 clause of the Northern Ireland protocol in an initial version of a European Union regulation, after it provoked a political outcry across Ireland and the United Kingdom.

“I am fully aware of the sensitivity related to the protocol on Ireland and Northern Ireland. I fought for this protocol and its implementation over the past year, and am determined to ensure it is upheld,” Dr von der Leyen said in response to emailed questions from The Irish Times.

“The consideration given to invoking article 16 was dropped before the decision was made final,” she added. “So, despite the fact that I regret that article 16 was mentioned in a provisional version of the decision, I am glad that the commission was quick on its feet to find another solution to address the question at stake.”

The article allows for aspects of the delicate Brexit settlement for Northern Ireland to be suspended in extraordinary circumstances, and had been a focus of demands from opponents of Northern Ireland’s special arrangements as a way to get rid of Irish Sea checks.

The Government was not consulted before the initial version of the regulation was published, and within hours the commission was forced to retract it amid the uproar and concerns that the Brexit settlement for the North had been deeply undermined.

The U-turn has been deeply damaging for Dr von der Leyen’s commission at a time when it is already facing criticism for its role in procurement as the EU lags behind the United States and Britain in the pace of vaccination.

On Monday the EU’s lead negotiator on Covid-19 vaccines contracts, Sandra Gallina, defended procurement efforts as putting the bloc in the “top league” of vaccination. She told MEPs that the commission was later to sign contracts with pharmaceutical companies for its portfolio of almost 2.3 billion doses of six vaccines, as it had held out for companies to accept more liability for any problems.

The use of article 16 was part of an EU move to introduce notification and permit requirements on vaccine exports from the bloc, in a bid to ensure pharmaceutical companies fulfil orders to member states after AstraZeneca announced its expected deliveries would be substantially reduced.

Due to Northern Ireland’s unique position, as part of the UK but within the single market for goods, there were concerns that it could render the export controls useless in regards to Britain as the North could be used as a back door.

“It is in that context that initial consideration was given to the need to track deliveries to Northern Ireland specifically, since they can then leave the EU without further checks,” Dr von der Leyen told The Irish Times.

“Our sole aim in designing the export transparency and authorisation scheme is to achieve transparency on shipments of vaccines abroad, so as to make sure that this is not done to the detriment of expected deliveries in the EU.”

As governments race to inoculate their populations, Britain has introduced mass testing to try to stamp out a spate of cases of a South African variant of Covid-19 that is feared to be more resistant to vaccines.