Dr Tony Holohan told the Nphet briefing that it is “not realistic” to expect the coming summer to be “characterised” by people flying to other parts of the world on holiday. Video: RTE 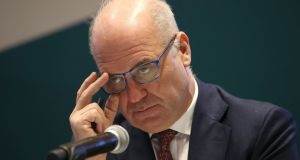 The recommendation of the National Public Health Emergency Team (Nphet) against non-essential travel is “for the foreseeable future,” he said.

It is “not realistic” to expect the coming summer to be “characterised” by people flying to other parts of the world on holiday, Dr Holohan told the Nphet briefing on Monday.

“I don’t think we’re heading for a summer where millions of people from this part of the word can head to the beaches, other than the beaches in their own localities.”

Asked about criticism of Nphet by Michael O’Leary, Dr Holohan said he had “nothing but admiration” for the Ryanair boss. However, he wouldn’t accept Mr O’Leary’s accusation that Nphet was putting out “misinformation”.

Public health officials sometime had to give people bad news, he said, but “overall we stand over the process, the information and the advice we’ve given”.

A further 10 deaths of Covid-19 patients were reported by Nphet, all of which occurred in January. This brings to 3,317 the total number of deaths in the pandemic. There were 1,026 Covid-19 related deaths in January.

Nphet also reported 1,062 confirmed cases of the disease, bringing to 197,553 the total number of cases in the Republic.

Nphet officials expressed concern about a slowdown in the decline of daily case numbers. “While we have experienced very significant improvement in incidence over recent weeks, I am concerned that it appears to be slowing down at much too high a level of infection,” Dr Holohan said. “People need to take real care in any setting in which they come into contact with others.”

“In particular, workplaces and retail settings need to review their existing protocols and ensure that their staff and customers are protected as much as possible.

“Given the prevalence of the B117 variant and how infectious it is, it is extremely important that people take all preventative measures possible, including staying home,” he said referring to the UK variant.

Urging people to adjust their expectations for the year, Dr Holohan said we’ve made significant progress “but not enough to contemplate the easing of measures”.

The 14-day incidence of the disease now stands at 479 cases per 100,000 people nationally. Monaghan has the highest county incidence, followed by Carlow.

On Monday afternoon, 1,436 Covid-19 patients were hospitalised, of which 207 were in ICU. There were 38 additional hospitalisations in the previous 24 hours.

Polling carried out for Nphet shows levels of worry in the population have fallen slightly but worry over the health of family and in relation to the economy remains high.

Prof Philip Nolan, chair of the Nphet epidemiological modelling advisory group, expressed concern that case numbers have “stabilised” over the past week or so, as had test positivity.

Incidence among over-85s, while starting to decline, is three times higher than for the overall population, he said.

Prof Nolan said mobility levels and the average number of contacts were still at low levels, but the resumption of testing of contacts last week would have contributed to some extent to the flattening out in case numbers.

Another reason could be increased transmissibility of the virus due to the rise in the B117 variant first identified in the UK, he said. This now accounts for 70 per cent of samples tested in Ireland, according to officials.

Workplaces were emerging as settings where people were “dropping their guard”, he said, and due to the spread of the UK variant this was more likely to “have consequences”.