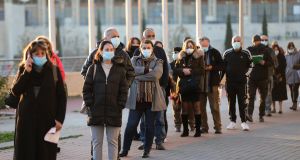 People wait in line to be aministered the Covid-19 vaccine in Jerusalem, Israel. , Israel has so far vaccinated some 2.2 million of its nine million citizens. EPA/ABIR SULTAN

Israel transferred 2,000 coronavirus vaccines to the Palestinian Authority (PA) on Monday, the first shipment of 5,000 that will be delivered in the coming weeks for frontline West Bank medical staff.

Last month Israel sent more than 100 vaccines to the PA in a one-off humanitarian gesture for emergency cases but was criticised by the United Nations (UN) and human rights groups for failing to extend its impressive coronavirus rollout programme to Palestinians.

More than three million of Israel’s nine million people have received the first of two required jabs and almost two million have now received both jabs, the highest per capita percentage in the world. Jewish settlers in the West Bank were amongst those vaccinated but the only Palestinians eligible were residents of east Jerusalem.

Some 2.7 million Palestinians live in the West Bank, and another 1.8 million in Gaza but Israel maintains that under the terms of the Oslo peace accords, signed in the 1990s, it is not responsible for health care in these areas.

The PA did not publicly ask for Israel’s help with a mass public vaccination campaign but there were reports of an unofficial request for 10,000 doses to inoculate its frontline healthcare workers, which was rejected by Israel.

Last week the team of health experts advising Israel’s coronavirus cabinet recommended that vaccines be given to Palestinians in the West Bank. The health officials noted that thousands of Palestinians enter Israel every day to work and represent a potential source for spreading the virus.

Palestinian foreign minister Riyad al-Maliki said Israel was obligated under international law to provide vaccines to the Palestinians, who live under a mixture of limited self-rule and Israeli military rule. Israel’s ambassador to the UN, Gilad Erdan, rejected this claim as “false and grotesque” in a speech to the international body last month.

The Palestine Liberation Organisation called on the international community to “hold Israel to account” and ensure it provided vaccines to all Palestinians living under Israeli occupation.

Palestinian Authority prime minister Mohammad Shtayyeh said the PA expected to receive 50,000 vaccinations from a number of different sources, mainly the Covax facility co-ordinated by the World Health Organisation. He said he expected the first shipment of vaccines would arrive at the end of February.

Covax, which aims to increase access to coronavirus vaccines for low- and middle-income countries, will vaccinate up to 20 percent of the Palestinian population for free.

The PA has pledged to also provide the Hamas-ruled Gaza Strip with vaccines.