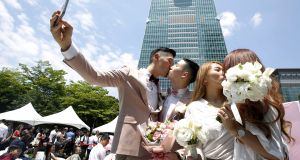 The gay community in Taiwan followed the Irish same-sex marriage debate and referendum very closely and they kept in close contact with groups active in the campaign. Photograph: Ashley Pon/Bloomberg via Getty

The battle has been long and at times bitter, but Taiwan’s LGBT activists say they now feel empowered to tackle remaining discrimination where they see it and act as a beacon for the burgeoning gay rights movement in Asia.

Taiwan became the first Asian state to recognise same-sex marriage last year, a historic breakthrough following a prolonged campaign, and one that activists say was buoyed by Ireland’s marriage equality referendum in 2015.

The introduction of the new law was divisive in Taiwan, and conservative and church groups vowed to punish President Tsai Ing-wen and her Democratic Progressive Party at the January 11th elections and vote in lawmakers who would reverse the legislation.

The electorate, however, delivered Tsai a landslide victory, meaning the LGBT community could heave a collective sigh of relief and focus on consolidating their position over the next four years.

There is great solidarity across the world, and the Irish community was very helpful sharing all their experiences

Taiwan has a vibrant LGBT scene, and one that has been spurred on by the legislative change. More than 200,000 people joined last year’s riotous gay pride parade in Taipei, among them many of the 2,600 same-sex couples who have legally tied the knot in Taiwan since the new law was introduced.

Also joining the party were representatives of several gay groups from all across Asia, many looking to emulate Taiwan’s legislative success in their own countries.

“We have had so many groups visit, from Hong Kong, Japan, Singapore, Malaysia, Korea, all over. We share our experience and resources, and together hope to develop the LGBT movement across Asia,” said Sih-Cheng Du, director of policy advocacy from the Taiwan TongZhi (LGBTQ) Hotline Association.

The community in Taiwan followed the Irish same-sex marriage debate and referendum very closely, he said, and they kept in close contact with groups active in the campaign in Ireland.

“It was inspiring. There is great solidarity across the world, and the Irish community was very helpful sharing all their experiences,” he said, “and now we are doing the same across Asia.”

The origins of the path to legislative reform can be traced back to 1986, the year before Taiwan’s four decades of martial law under Kuomintang leader Chiang Kai-shek finally came to a close.

Chi Chia-wei, a solo activist at the time, decided to call a press conference in a downtown McDonalds. He stuffed notices into the postboxes of local and international media outlets, reserved a small section of the fast-food venue, bought dozens of soft drinks from the counter, and waited to see if anyone would show up.

His invites stirred press intrigue and with the cameras rolling he did the unthinkable in such oppressive climes: he openly declared his sexual orientation and launched a one-man HIV/Aids education campaign. He also petitioned the legislature to permit same-sex marriages, a proposal that was promptly and angrily rejected.

Chi quickly found himself in trouble with the law, and was sentenced to five years’ imprisonment on robbery charges that were widely seen as fabricated. He sat in a cell for five months, before being pardoned by a lenient and tearful judge who sent him on his way.

In the following years he set up an LGBT support hotline, raised funds for Aids victims, and continued challenging the island’s laws in the courts. A well-known public figure on the streets of Taipei, he would hand out free condoms, occasionally dressed in a suit made of condoms.

In 2013 he made another of his many attempts to apply for a marriage licence, and when denied he appealed to the Taipei city government, who referred the constitutionality question to the courts.

As that was winding its way through the legal system, Tsai Ing-wen was preparing for her first presidential bid. In November 2015 – the same month that same-sex marriage became legal in Ireland – she announced her support for the legislation in Taiwan.

When she came to power the issue was sidelined, though it proved to be deeply contentious amongst her governing ranks, much to the disappointment of the LGBT community, who accused her of reneging on campaign promises. She did, however, manage to appoint several liberally oriented judges to the constitutional court in her early days at the helm.

That court, considering Chi’s latest application that the ban on gay marriage was unconstitutional, then reached the landmark decision in 2017, declaring that marriage in Taiwan should indeed be opened to same-sex couples. It gave the government two years to find a legal solution.

The court decision was met with a conservative outcry, and opponents put forward a series of referendums in which two-thirds of the voters opted to reject same-sex marriage. While the government had said prior to the referendums that they were obligated to follow the court ruling regardless of any referendum outcome, it was an acrimonious time that drove a wedge into society.

“When we spoke to LGBT groups and individuals in Ireland, they told us to avoid a referendum if we could. They said it would be bitter and divisive and offensive and cause a lot of hurt to our community,” Du said. “They were right but we had no choice here. So, they advised us to prepare to protect our community, to give them emotional support.”

Conservative and Christian groups ran a well-funded campaign of hate and scare-mongering, he said, “and so much fake news” that led to “a huge amount of pain in our community . . . we really got beaten up in the process.”

And while the vote was non-binding, it did lead the government to pass a special same-sex law as a compromise move, rather than amending the civil code, which is what the LGBT and human rights groups had been seeking to deliver full equality.

So, in May last year, right on the court’s two-year deadline, the legislators passed a Bill making same-sex marriage a reality.

Speaking to Taiwanese media at a rally outside the legislature after the vote, the 60-year-old Chi marvelled at the massive crowd around him.

“It was just a one-man campaign when I started, now I have 250,000 people here beside me. I am not alone in doing what is right,” he said.

He was never discouraged by the setbacks, he said, but always felt the cause was worthy.

“My belief is that if you can do one thing right in this life, then it is all worth it,” he said.

As the civil code was not amended, same-sex couples still face areas of discrimination that the TongZhi group and others intend to challenge, Du said.

Currently, same-sex couples can only adopt if the child is the biological offspring of one of the couple, for instance, and Taiwanese citizens can only have a transnational same-sex marriage recognised if their partner is from one of the 30 or so countries around the world that recognise gay marriage, he said.

“There are other issues too, such as gender equality education, that we need to tackle,” he said. “It will all take time. It’s a long process.”

But Taiwan, and Asia, are changing, he said.

After Tsai signed the historic law, she gave her pen to Chi in recognition of his decades-long struggle.

“I used this pen to sign the same-sex marriage Bill. Please keep it as a token. May love unite everyone in this land,” she wrote in a note to him.

Chi then acted as witness for the first same-sex marriages in the country, using the president’s pen to sign his name on the official marital documents.