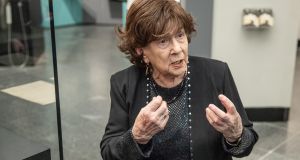 Holocaust survivor Sheindi Miller-Ehrenwald (90) during the opening of the exhibition Deported to Auschwitz – Sheindi Ehrenwald’s Notes at the German Historical Museum in Berlin. Photograph: Omer Messinger/EPA

Nearly 75 years after the liberation of Auschwitz a 90-year-old survivor has come forward with her eyewitness diary, detailing her deportation from Hungary and hellish fight for survival in the notorious death camp.

After seven decades keeping her diary secret, Sheindi Miller-Ehrenwald, who has lived in Israel since 1949, said the upcoming 75th anniversary of the liberation of Auschwitz was the right time to go public with her hand-written testimony on yellowing paper.

“I am amazed I could write it all down, it was dangerous and still I wrote, how did I do it?” she told the Bild tabloid. “When I hear some people denying the Holocaust and what happened there, I could blow my top. Here in the diary is everything that happened.”

She was just 14 with dreams of becoming a teacher when her world collapsed around her in the small Hungarian town of Galanta, today part of Slovakia.

Exactly a month after Nazi troops marched into the central European country in March 1944, the machinery of the Holocaust were set in motion. The aim: to deport and murder about 800,000 Hungarian Jews.

Holocaust survivor Sheindi Miller-Ehrenwald - She was 14 and kept a diary in the concentration camp https://t.co/ctKSOVCM9R

The Ehrenwald family, who owned a wine shop in Galanta, were among the first targets for deportation on April 20th, 1944. Hungarian police showed up at their apartment door, confiscated the keys from Sheindi’s father and ordered them to pack.

“We’re packing, everyone’s holding something in their hands, hurry, hurry,” she wrote later in her diary.

“The door slams shut . . . I can hear the keys in the lock . . . we are chased away from a place that my father bought. A piece of my heart was broken.”

A nightmarish journey began, as the two adults and five Ehrenwald children – and dozens of others – are squeezed into a cattle wagon with four small, barred windows.

“We have water and a bucket for the trip prepared,” she wrote in her diary, sitting on the floor of the crowded wagon. “It already looks like a prison with prisoners.”

After a night sleeping rough in a roofing tile factory, a collection point before the long journey to Poland begins, she writes about watching the sun rise.

“She looks curiously from between the clouds as if even she has never seen something like this: so many women, girls, men and boys, tousled with half-opened eyes, looking around as if they can’t believe this is happening to them,” she wrote. “How lovely it would be if we were dreaming, but you shouldn’t even dream something like this.”

Exhausted and weakened, the Ehrenwald family arrived with dozens of Hungarian friends and neighbours in Auschwitz. Of the seven-head family only Sheindi and her sister survived, after being transferred from the notorious camp in Nazi-occupied Poland to a work camp.

On the journey she remembers a four-month-old baby died and was taken from its mother to be buried. “We were held in the wagons like animals, that’s how I write it in the diary,” she told Bild. “But the real animals are the people who did that to us.”