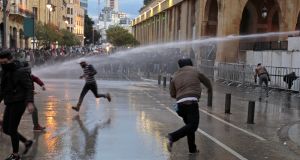 Demonstrators are sprayed by a water cannon during a protest against the newly formed government in Beirut, Lebanon, on Wednesday. Photograph: Reuters

Lebanon’s new cabinet met on Wednesday, ending a three-month deadlock over its formation.

But even before the line-up was announced on Tuesday evening, thousands of Lebanese had poured into parliament square in central Beirut and streets in other cities to reject the cabinet, proclaim revolution, and hurl missiles at security men who fired rubber bullets and tear gas in response.

Since violence erupted last weekend more than 500 civilians, police and soldiers have been wounded.

Despite the angry response, United Nations secretary general António Gutteres welcomed the formation of the cabinet and French president Emmanuel Macron pledged to do “everything” to end “Lebanon’s deep crisis”.

“Today we are in a financial, economic and social dead end. We are facing catastrophe,” said prime minister Hassan Diab. He called his cabinet a “rescue team”, established to save Lebanon from economic disaster due to decades of mismanagement and corruption.

Mr Diab vowed to create an independent judiciary, recover “looted funds”, and draw up a new electoral law. It remains to be seen whether veteran politicians who chose ministers will co-operate with his “government of last resort”.

French language daily L’Orient Le Jour observed that the cabinet is “certainly comprised of technocrats” recognised by their professional and academic attainments, “but it is far from being independent” – which is what the protesters demand.

Each minister was selected by parties belonging to the parliamentary majority Christian-Shia bloc dominated by president Michel Aoun, parliamentary speaker Nabih Berri and Hizbullah’s Hassan Nasrallah. The Beirut press listed names of ministers with their religions and backers as well as qualifications.

Mr Diab delivered on his promise to form a small technocrat cabinet with 20 rather than 30 ministers, including six women. Finance minister Ghazi Wazni was an adviser to parliament’s finance and budget committee and foreign minister Nassif Hitti served as Arab League representative to Unesco and the Vatican.

However, the Arab world’s first defence minister and deputy prime minister, Zeina Akar Adra, was appointed simply because she is the Orthodox Christian wife of Jawad Adra, a high-profile secular Sunni consultant.

Her appointment conforms to Lebanon’s sectarian powersharing model, which has trapped the country in Catch-22 contradictions and limitations from which protesters are determined to escape.

Mr Diab said his first trip would be to the Gulf where he hopes to raise funds to halt Lebanon’s economic slide. However, since his cabinet is associated with western-sanctioned Hizbullah, an ally of Iran, he could find difficulty there and in Europe where international donors, also leery of Lebanon’s rampant corruption, have raised but not delivered $11 billion for Lebanon.

Finance minister Mr Wazni said Lebanon would be bankrupt if it did not secure foreign funding. The International Monetary Fund has recommended raising taxes and cutting subsidies, risking a violent backlash from severely stressed Lebanese who took to the streets on October 17th to protest against a small daily tax on free-calling apps.