In Italy death toll rises 627 over 24 hours while virus fatalities crest 1,000 in Spain 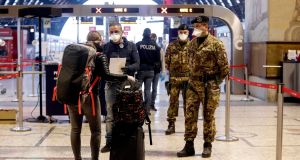 Italy recorded its highest daily total of coronavirus deaths on Friday as the United Nations warned of a global recession “perhaps of record dimensions”.

“We are in an unprecedented situation and the normal rules no longer apply,” said UN chief Antonio Guterres as global infections reached 242,000 in the world’s worst public health crisis since the 1918 Spanish Flu.

Italy’s escalating death toll from Covid-19 rose by 627 in 24 hours, to reach 4,032 in total, a day after it surpassed China as the country to register the most deaths from the respiratory disease.

Italy had 47,021 confirmed cases on Friday night, nearly half of them in the hardest-hit region of Lombardy in the north, where the virus has killed 2,549 people, including medics and priests who gave last rites to the dying.

The Italian army has had to carry in trucks of coffins to relieve overwhelmed morgues in the badly hit city of Bergamo. And soldiers are to enforce a lockdown in Lombardy as authorities warned the outbreak is not slowing.

Lombardy regional president Attilio Fontana said 114 soldiers would be on the ground in the region. “It is still too little, but it is positive.”

In Spain, the second-worst affected country in Europe after Italy, authorities said they would convert a Madrid conference centre into a giant makeshift military hospital to treat thousands of patients.

In Germany, Bavaria became the first federal states to impose a total curfew on its citizens to contain the spread of the virus.

Early testing and ample medical facilities have helped Germany keep its death toll far lower than other European nations so far, at just 31. But the government has closed schools, shops and restaurants and appealed to the good sense of people to take responsibility for slowing the spread of the disease.

“We’re taking away the ancient, inalienable right of free-born people of the United Kingdom to go to the pub. And I can understand how people feel about that,” said Mr Johnson, as cases in the UK neared 4,000. “It’s a huge wrench.”

“We are co-ordinating the operations to repatriate thousands of Europeans who are stranded abroad,“ said Mr Borrell. “Little by little, we are trying to bring people home.”