Hong Kong's chief executive Carrie Lam faced a tough grilling by reporters during a weekly news briefing, in which she evaded questions on whether she has the autonomy to scrap an extradition bill without Beijing's approval. Video: Reuters 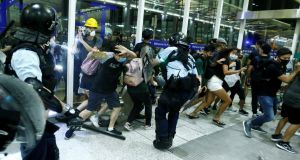 Air traffic in Hong Kong was grounded by protests for the second consecutive day on Tuesday, as the city’s chief executive Carrie Lam choked up at a press conference and the UN said the actions of the city’s police had created a “considerable risk of death or serious injury”.

Airport authorities cancelled incoming and outgoing flights in the late afternoon as thousands of protesters streamed into the arrivals and departures terminals once again – part of the two-month movement that is calling for democratic reforms and an independent inquiry into alleged police brutality.

On Monday many protesters had carried placards saying “an eye for eye”, in reference to a female medic who doctors fear is now blind in one eye after police allegedly shot a bean-bag round at her from close range during a rally on Sunday.

On Tuesday, some in the airport carried signs saying “a tooth for a tooth”, referring to a video clip from the weekend that went viral showing undercover police officers arresting a protester, kneeling on the back of his neck and shoving his face into a pool of his own blood.

As the man was held down by police who had infiltrated the protesters and were dressed in their trademark black T-shirts, facemask and helmets, he sobbed and begged to be let go, saying “My front teeth have been smashed in”.

There were chaotic scenes in the airport during the day on Tuesday, as trolleys were used to barricade the check-in counters and several fights and loud arguments broke out between angry travellers and protesters.

Late on Tuesday night violence started to escalate in the airport after protesters held and beat two men who they suspected of being undercover agents. Riot police later stormed in firing pepper spray and wielding batons, and bundled several protesters into police vans.

In one scene captured on a phone’s video camera, a policeman slammed a woman to the ground and struck her, before a group of protesters attacked him and beat him with his own baton. The cornered policeman pulled out his gun and pointed it at the protesters, who then ran away.

At a press conference on Tuesday, Hong Kong’s chief executive Carrie Lam appeared to be on the brink of tears at a few points as she faced a barrage of questions from journalists about her handling of the crisis.

“Take a minute to think – look at our city, our home,” she said, choking up. “Do you really all want to see it pushed into the abyss?”

She continued to defend the police and did not offer any concessions to the protesters, saying further violence would “push Hong Kong down a path of no return”.

The UN’s top human rights official condemned the ongoing violence in Hong Kong and urged all sides to find a peaceful solution, reserving special criticism for the police.

A spokesman for high commissioner for human rights Michelle Bachelet said that the UN had reviewed “credible evidence of law enforcement officials employing less-lethal weapons in ways that are prohibited by international norms and standards”.

He said officials could be seen firing tear gas canisters into “crowded, enclosed areas and directly at individuals on multiple occasions, creating a considerable risk of death or serious injury”, and he urged the Hong Kong authorities to “act with restraint”.

China’s mission to the UN in Geneva called it a “wrongful statement” and said that over the past two months protesters had damaged public facilities, blocked roads and public transport, used lethal weapons, paralysed the airport and were “showing a tendency to resort to terrorism”.

Hundreds of protesters were still in the terminals late on Tuesday night, the fifth straight day they have occupied the city’s airport.