US and Russia at odds over Ukraine's sanctions on Putin ally 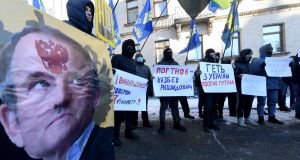 The United States has welcomed Ukraine’s imposition of sanctions on wealthy politician and businessman Viktor Medvedchuk, Russian president Vladimir Putin’s closest ally in Kiev, as the Kremlin denounced the move as dangerous and undemocratic.

Mr Medvedchuk and wife Oksana Marchenko are among eight people and 19 firms that will be barred from doing business in Ukraine and will have assets frozen under a decree signed on Saturday by the country’s president, Volodymyr Zelenskiy.

Officials in Kiev said the targets, which include five Russian citizens and several companies registered in Russia, are being sanctioned due to their alleged financial links to Moscow-led separatists who have controlled parts of the Donbas region of eastern Ukraine since fighting began there seven years ago.

“We have sufficient evidence that this is a terrorist group which knowingly finances and helps the militants,” said Oleksiy Danilov, the secretary of Ukraine’s national security council, adding that Mr Medvedchuk and Ms Marchenko allegedly own a factory in Russia that supplies fuel to separatist-held areas.

Ivan Bakanov, the head of Ukraine’s SBU security service, said the sanctions were imposed on the basis of evidence collected by the agency, which is also investigating how the militants secured funds through the “illegal mechanism of supplying coal from temporarily-occupied territory to Russia and Ukraine”.

Kiev also imposed restrictions on five private planes that Mr Medvedchuk has allegedly used to fly from Ukraine to Russia, bypassing a ban on direct flights between the neighbours.

In Moscow he often meets senior Russian politicians and sometimes Mr Putin, who is godfather to one of his daughters, to discuss how to re-establish close ties between Ukraine and Russia that were wrecked in 2014 when the Kremlin annexed Crimea and fomented a war in Donbas that has claimed 14,000 lives.

Mr Medvedchuk, who is a leader of the Opposition Platform-For Life party in Ukraine’s parliament, said the sanctions were unfounded and put Kiev’s pro-western authorities “on a path towards establishing a dictatorship”.

He said Mr Zelenskiy had “crossed the last moral boundaries” to attack and silence critics, and he described Ukraine’s recent imposition of sanctions on television channels owned by one his allies as “an unprecedented and criminal attack on freedom of speech”.

Kremlin spokesman Dmitry Peskov decried “repressive actions against the media, against citizens of Ukraine, against leading politicians”, which he said may indicate that Kiev could try “to solve the problem of [Donbas] by force”.