UN to raise developments in Princess Latifa case with UAE

The BBC's investigative news programme Panorama has published a video it said was of Sheikha Latifa, one of the ruler of Dubai's daughters, saying that she was being held against her will in a barricaded villa. Video: Reuters 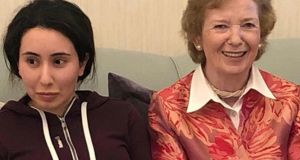 The UN has said it will raise with the United Arab Emirates new developments regarding the welfare of Princess Latifa of Dubai, who claimed she has been held hostage by her father, the ruler Sheikh Mohammed bin Rashid Al Maktoum.

The princess reportedly tried to flee Dubai in February 2018, but days into her escape she was forcibly removed from a yacht off the coast of India and returned to Dubai.

Rupert Colville, spokesman for the Office of the UN High Commissioner for Human Rights, said: “We will certainly raise these new developments with the UAE.” Mr Colville said other parts of the UN human rights system “may also become involved once they have analysed the new material or received specific allegations.”

His comments come after a BBC Panorama documentary released secretly recorded videos from Princess Latifa who claims she was being held against her will and feared for her life.

Using a mobile phone, she recorded a message saying: “I’m a hostage, I’m not free. I am prisoned in this jail. My life is not in my hands.”

The footage has prompted global calls for a UN investigation. The Irish Department of Foreign Affairs said the reports are “very concerning”.

In a statement, the department said: “We note that the Office of the UN High Commissioner for Human Rights has indicated that it will be raising the case with the UAE authorities, and we await the outcome of their engagement.”

He told BBC News he is “concerned about it”. He said the videos showed “a young woman in deep distress”, adding that the UK would watch any developments from the UN “very closely”.

Former UN high commissioner for human rights Mary Robinson, has joined in calls for further investigation, telling BBC Panorama she was “misled” during a lunch with the Al Maktoum family in December 2018. The former Irish president told the programme “things have moved on” since she met with Princess Latifa and her family in 2018 amid increasing international concern for the princess’s welfare.

Mrs Robinson had previously been criticised for her retelling of that meeting. She had described the princess as a “vulnerable” and “troubled” young woman who regretted planning an escape and was now in the care of her family. She said Princess Latifa was “very likeable” but clearly needed the medical care she believed she was receiving in Dubai. Photographs of the meeting were subsequently released by the UAE, in a move that Mrs Robinson said “stunned” her .

Princess Latifa told the BBC programme she was tricked into partaking in the pictures with her stepmother Princess Haya bint Hussein and Mrs Robinson. She said her stepmother visited her and told her that she would be allowed out as a “test” to see if she could behave around people. Mrs Robinson “never said that she was a former UN head of human rights,” the princess said.

“If I knew that I would have said everything, but, no, she never told me that . . . We never discussed my case,” Princess Latifa said, adding that the only topics they discussed were sports, veganism, the environment, and Mrs Robinson’s book. She told Panorama she was returned to her quarters following the meeting.

Speaking to reporters in Dublin in July 2019, Mrs Robinson said she had never been friends with the leadership of the UAE except for Princess Haya “who is still my friend”.

Princess Haya, Sheikh Mohammed’s sixth and youngest wife, fled to London in April 2019 with their two young children. His attempt to return the children to Dubai triggered a legal action in the family courts.

The government of Dubai and the UAE has previously said that Princess Latifa is safe in the loving care of her family.