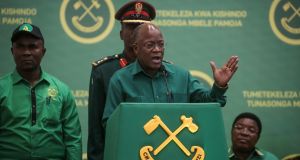 President John Magufuli: called on citizens for three days of prayer to defeat unnamed “respiratory diseases” amid warnings that the country is seeing a deadly resurgence in infections. Photograph: AP

Dorothy Gwajima, Tanzania’s health minister, held a Covid-19 press briefing this month that looked more like a cooking show. Brandishing a blender as an aide added ginger, onions, lemon and pepper to the concoction, she explained that the vegetable smoothie would ward off coronavirus.

Offering no evidence for the claim as she downed a glass, Gwajima said the virus was “ravaging” neighbouring countries but not Tanzania. The east African country of nearly 60 million people had no need of vaccines and “no plans to receive them”, she said.

Her pronouncements echoed the views of John Magufuli, Tanzania’s president, who has declared Covid-19 vaccines dangerous and unnecessary. A devout Catholic, he has said God would protect his nation from the disease.

“If the white man was able to come up with vaccinations, he should have found a vaccination for Aids by now,” he said.

As rich nations rush to vaccinate their populations and poorer countries, including almost all those in Africa, press for supplies of the jabs, Tanzania stands out as a Covid-19 denier and vaccine refusenik.

Its stance not only endangers its citizens but people elsewhere, particularly if mutant strains are allowed to develop in the country unchecked, health experts warn.

Dr Ahmed Kalebi, a pathologist and lecturer at the University of Nairobi in neighbouring Kenya, said the spread of the coronavirus from China showed new pathogens would quickly ricochet around the world. The same could happen if a virus variant emerged.

Although not referring specifically to Tanzania, he warned: “Each country is a danger to other countries because mutant strains can go everywhere. If you have a public health catastrophe in one place, it will have a domino effect in other countries.”

Although Tanzania’s government closed schools and colleges for part of last year, Magufuli has encouraged people to go to work and attend places of worship. The government has refused to release Covid-19 data since May, when its official death toll stood at 21.

The president has even mocked virus testing, saying he was able to fool scientists at the national laboratory by sending diverse samples – including papaya juice and diesel oil – labelled as human blood.

“We have stayed for more than a year without coronavirus, even though none of us here has put on their face mask,” he asserted in a recent speech.

However, Tanzanians, many of whom wear face masks, have said on social media that they know people who have died after showing coronavirus-like symptoms. Religious authorities and some government agencies have encouraged hand washing in an acknowledgment of the danger.

Magufuli has conceded that some Tanzanians favour vaccines, accusing people of travelling abroad for immunisation and bringing Covid-19 back.

Doctors in Mombasa, a Kenyan port city, report an influx of Tanzanian patients seeking Covid treatment, raising the fear that any variants circulating in Tanzania could be imported.

Charles Kitima, secretary-general of the Tanzania Episcopal Conference, a grouping of Catholic bishops, said priests had been holding daily funeral masses in recent weeks – a sharp increase on normal levels. Although he could not confirm the deaths were from Covid, he said: “We see people in hospitals suffering from breathing complications, and due to that, they end up dying.”

Magufuli’s pronouncements contrast with the stance of counterparts across Africa, where most governments have taken Covid-19 seriously. Some countries, including Rwanda, began immunisations this week, with others expected to start this month and next – although Burundi, Eritrea and Madagascar, where politicians have also been sceptical of Covid, have not yet ordered vaccines.

Some commentators in neighbouring countries have expressed alarm at Magufuli’s approach. Gado, a Tanzanian cartoonist working in Kenya, published a drawing in The Elephant, a pan-African news platform, depicting Tanzania’s leader taking a steam remedy – another official recommendation – while a green coronavirus character snickers to itself.

“It seems downright irresponsible, if not suicidal for Kenya, for the region and the continent – not to mention the globe – to ignore Magufuli and his like who do not take the pandemic seriously,” said Patrick Gathara, a Kenyan political analyst.

However, the African Union, the World Health Organisation and the Africa Centres for Disease Control and Prevention have been reluctant to criticise Tanzania in public, although they have stressed the importance of reporting data.

Matshidiso Moeti, WHO regional director for Africa, said Tanzania was not co-operating with continent-wide gene-sequencing needed to detect new variants. She said two Tanzanian travellers arriving recently in Britain had tested positive for the 501.V2 variant first detected in South Africa. The UK government has added Tanzania to its “red list” of countries from which entry is barred.

India’s government said this week that one case of the 501.V2 strain had been imported from Tanzania.

Tanzania could pay a high economic price for any long-lasting travel restrictions. With Zanzibar and the Serengeti Game Reserve attracting thousands of international visitors annually before the pandemic, the country depends heavily on tourism, which contributes at least 10 per cent to national output.

Meanwhile even senior figures in the Tanzanian church disagree with the president that their country is protected by divine providence. Masks were more effective, said Yuda Thadei Ruwaichi, the bishop of Dar es Salaam.

“Covid is not finished,” he said. “Covid is still here.”