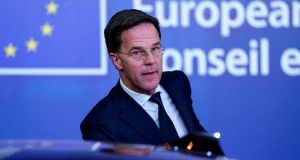 It was a political masterclass to watch Dutch prime minister Mark Rutte switch roles at last week’s EU budget talks, from the ever-reliable neighbour and ally of German chancellor, Angela Merkel, to the intransigent leader of the Frugal Four whose behaviour she panned as “childish”.

Despite domestic pressures, Rutte’s EU credentials are flawless. He’s been a constant presence at Merkel’s shoulder since the euro zone crisis in 2009, through the migrants crisis and then Brexit – more likely to be on the side of shoring up the union than of the naysayers.

So it must have been quite a new experience for him to get it in the neck from all sides, and not just from Europe’s most powerful woman.

French president Emmanuel Macron described Rutte’s unwillingness to swallow a bitter Brussels pill – increasing the Dutch share of the EU budget between 2021 and 2027 from €5 billion to an annual average of €6.9 billion – as “shocking”.

EU president Charles Michel weighed in as well. After a late-night meeting with Rutte and the leaders of Denmark, Austria and Sweden – the other three refuseniks – he could scarcely believe they were still holding out, declaring: “What arrogance!”

That same exasperation was evident when Spain’s Socialist prime minister, Pedro Sánchez, asked reporters: “Does Rutte realise that I represent more people than his Frugal Four all put together?”

Now at the head of his third coalition government, if there’s one thing Mark Rutte knows about it’s political expediency.

Britain’s departure from the EU has left a gap of €75 billion over seven years in the EU’s finances – and those who remain have to fill it.

Or do they? Rutte – not unreasonably, given the degree to which money is squandered, according to the European Court of Auditors – favours a smaller budget, more efficiently applied.

The European Commission has proposed an increase of 1.1 per cent of the bloc’s gross national income (GNI). The Frugal Four say nothing above 1 per cent is acceptable. Charles Michel has tabled a compromise of 1.074 per cent. The Frugal Four have held their ground.

The problem for Rutte and for wealthier EU countries is that the debate over net contributors and net beneficiaries is becoming jaded domestically.

Facing two anti-EU parties at home, widespread scepticism over the cost and wisdom of enlargement, and economic growth of just 1.4 per cent this year or perhaps less due to US-China trade tensions and coronavirus, Rutte is absolutely right: more money for Brussels won’t be popular.

In addition to which, it’s hard to make a convincing case on the basis of the figures.

For example, whereas Common Agricultural Policy funding spent in France between 2014 and 2020 was effectively a financial injection equivalent to 0.41 per cent of French GNI, in the Netherlands that injection was only 0.12 per cent of Dutch GNI.

Where are the benefits?

The picture was similar with cohesion funding, which amounted to 2.75 per cent of Hungary’s GNI during the same period – whereas in the Netherlands it was a paltry 0.03 per cent of Dutch GNI. So where are the benefits?

That, of course, is where rebates come in: the idea that countries that contribute disproportionately should get some of it back.

France – perhaps recalling Margaret Thatcher’s famous rebate battle in 1984 – says the rebate system should be abolished. But interestingly, here is where the Netherlands, Austria, Sweden and Denmark are joined by Germany in favouring the retention of the rebate system.

One compromise being talked about in the Netherlands is a classic EU fudge whereby pro-rebate countries would get permanent “lump sum corrections” to their contributions – in exchange for agreeing a budget that is marginally higher than their 1 per cent red line.

That could work for Rutte, especially if he can also achieve a “modernised” budget, meaning more emphasis on climate change and migration in particular.

It’s also a deal on which Rutte and Merkel can find common ground. Or perhaps they never parted.