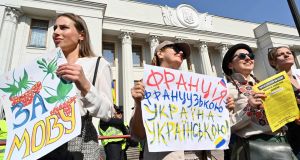 Deputies in Ukraine have backed a Bill to strengthen Ukrainian as its state language, prompting warnings from Moscow that the move could deepen a Kremlin-fomented conflict in the country’s mostly Russian-speaking east.

The Kiev parliament overwhelmingly approved the language Bill, a day after Russia angered Ukraine and its western allies by offering fast-track citizenship to Ukrainians living in areas of the Donbas region held by Moscow-led separatists.

Ukraine’s outgoing president Petro Poroshenko said he would sign into law provisions to make Ukrainian the compulsory language for people doing a wide range of jobs, including state officials, doctors, lawyers and military officers. The new law will also increase the amount of Ukrainian used in the country’s media.

“The Ukrainian language is a symbol of our people, our state and our nation. . . This is another crucial step towards our mental independence,” said Mr Poroshenko, who will be replaced in the coming weeks by last Sunday’s election winner Volodymyr Zelenskiy.

“Respect for the rights of people who speak Russian and other languages is also important – it is a European practice which we will adhere to strictly.”

Language has been a hot-button issue since the 2014 Maidan revolution, when Ukraine pivoted to the West and set about strengthening its own national culture and identity after centuries of Russian domination.

The Kremlin portrayed Ukraine’s post-Maidan authorities as a threat to the country’s millions of Russian speakers, and claimed to be protecting Crimea’s ethnic Russians from “fascists” when it annexed the Black Sea peninsula in March 2014.

Moscow used the same rhetoric in backing separatist militants in Ukraine’s eastern Donbas region, where it initiated and still fuels a conflict that has now claimed some 13,000 lives and displaced about 1.6 million people.

“In essence, it is a law on forced Ukrainianisation . . . providing for significant restrictions and, in many cases, a direct ban on the use of Russian and languages of national minorities in various spheres of public life,” said Russian foreign ministry spokeswoman Maria Zakharova.

On Monday, senior Kremlin aide Vladislav Surkov said the offer of passports to people living in militant-controlled areas of Donbas was “Russia’s duty to people who speak and think in Russian, who are now in a very tough situation due to the repressive actions of the Kiev regime”.

Moscow’s move was condemned by the United States and the European Union, and seen as an indication that Russian president Vladimir Putin wants to make life immediately uncomfortable for incoming Ukrainian leader Mr Zelenskiy, a popular comedian and political novice.

Mr Putin said on Thursday that the future of Ukrainian-Russian relations depended on Mr Zelenskiy’s actions, while adding: “We want and are ready to re-establish our relations in full, but cannot do it in a one-sided way.”

Mr Zelenskiy, who speaks better Russian than Ukrainian, vowed there would be “no compromise” over Ukrainian being the country’s sole state language, but said he preferred to promote it through “positive examples rather than bans and punishments”.