Russian president Vladimir Putin has met with North Korean leader Kim Jong-un, saying he expects his visit to Russia will help the two countries understand how to reach settlement over the Korean peninsula and develop bilateral ties. Video: Reuters 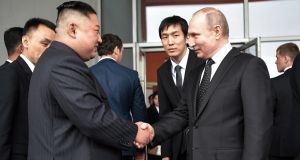 Vladimir Putin hailed “fruitful” talks with North Korean leader Kim Jong-un at their first summit, which boosted Moscow’s efforts to insert itself into negotiations over the future of the Korean peninsula.

The Russian president said on Thursday that Mr Kim had asked him to discuss the conclusions of their meeting with China and the US, whose talks over the dictatorship’s nuclear weapons programme have stalled.

The summit in Vladivostok came two months after the North Korean dictator’s second meeting with US president Donald Trump ended with no progress on easing crippling economic sanctions against the isolated communist country.

At the conclusion of talks that were heavy on bonhomie and light on substantive policy announcements, Mr Putin raised a toast to his guest at a banquet of Russian caviar, dumplings and other local delicacies. He praised their “constructive, businesslike and friendly” talks and “the health of Comrade Chairman Kim Jong-un”.

For Mr Kim, his first visit to Russia was aimed at demonstrating to Washington that he had other potential international allies, while it offered Mr Putin, who was cut out of US-led talks over the future of Mr Kim’s regime, a chance to cast Russia as a geopolitical heavyweight.

“Chairman Kim Jong-un himself personally asked us to inform the American side about his position and the questions he has about what’s unfolding on the Korean peninsula,” Mr Putin told reporters after the summit ended. “[And] \of course I will speak tomorrow in Beijing, probably with the leadership of the People’s Republic of China.”

Mr Kim told his host after a private one-on-one meeting that lasted twice the scheduled 50 minutes: “Thank you for this fruitful conversation. We have come here to visit a friendly nation ... [and] had a very substantive conversation on a number of issues.

“This meeting will be very useful and allow us to reinforce our historically friendly relations, which go deep,” added Mr Kim, who had travelled to the Pacific port city close to the border with North Korea, on an armoured train seeking to “exchange and co-ordinate” their views.

Mr Putin, who has tried to deepen ties with Asian partners since the imposition of western sanctions against Moscow in 2014, praised his guest for “efforts to develop the inter-Korean dialogue and to normalise North Korean-US relations”.

Analysts said the largely symbolic summit was unlikely to produce specific measures to improve North Korea’s economic situation or ease international sanctions against Mr Kim. But it would give the isolated regime the chance to demonstrate that it was being courted by powers other than the US, while also enabling Mr Putin to present himself as a regional diplomatic actor.

“The meeting ... is a strong signal from North Korea that it no longer is a hermit state,” said Anwita Basu, an analyst at the Economist Intelligence Unit. “Of course, it remains economically sanctioned but the state wants to show that speaking to the North Koreans is no longer a diplomatic taboo.

“Economically, Russia’s influence on North Korea is not as great as that of China’s but it is still a very important ally.”

The summit took place 18 months after the Kremlin invited Mr Kim to visit, during which time he held multiple rounds of talks with Mr Trump, as well as the leaders of China and South Korea.

Moscow was an important backer of Pyongyang during the cold war, and has said it would be keen to strike new trade and investment deals if international sanctions against Mr Kim’s regime were lifted.

Mr Putin said that he and Mr Kim had discussed the potential of constructing gas and oil pipelines to supply energy to North Korea, and had talked about the “solutions available” that could allow thousands of North Korean migrant workers, who send home remittances critical to the country’s ailing economy, to avoid deportation this year as demanded by UN sanctions.´ – Copyright The Financial Times Limited 2019