Saudi and Emirates intervention to be fuelled by Trump’s veto 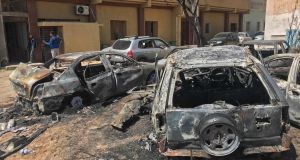 Aftermath of an overnight rocket attack, on the Libyan capital of Tripoli on April 17th. Khalifa Haftar has launched an offensive to take the city. Photograph: Mahmud Turkia/AFP

The US presidential veto of bipartisan congressional legislation to end US participation in the Yemen war could embolden the rulers of Saudi Arabia and the United Arab Emirates to maintain their policy of aggressive intervention in conflicted Arab countries.

Saudi crown prince Mohammed bin Salman and his Emirati counterpart Mohammed bin Zayed, who launched the Yemen war in 2015, have joined forces with Egyptian president Abdel Fattah al-Sisi to intervene in the Libyan civil war, which began with the fall of Muammar Gadafy in 2011.

They back former general Khalifa Haftar, who has mounted an offensive to topple the UN-recognised government in Tripoli.

Haftar enjoys their support because he battles the Muslim Brotherhood, which is regarded by all three leaders as their chief enemy.

Since 2016, self-styled field marshal Haftar, who heads the Libyan National Army, a regular force with command-and-control, has battled extremist and rebel groups in eastern Libya with backing from the Emirates, Russia and France. He now controls the east, Libya’s main oil fields, and the traditional rival of Tripoli, Benghazi, where he has installed an opposition regime,

The Wall Street Journal reported Haftar last week visited Riyadh, where he was promised funds to finance his campaign. He also went to Cairo to receive the endorsement of Sisi, who has provided Haftar with war planes, armour and heavy weapons.

France is playing a double game. While granting formal recognition to the government in Tripoli, Paris has armed and trained Haftar’s troops since 2015. It views him as the figure who can unite Libya and defeat the jihadis who menace north and Sub-Saharan Africa and the Middle East.

Tripoli’s defenders consist of a collection of militias which rob state institutions, smuggle African migrants to Europe and fight each other. Backed by Qatar and Turkey, the militias are affiliates of or tilt towards the Brotherhood. These militias have vowed to protect the transitional government, led by civilian technocrat Fayez Sarraj, established in 2016 and endorsed by the UN, US and EU.

Fighting has postponed the mid-April, UN-convened national conference slated to promote reconciliation and prepare for presidential and parliamentary elections by the year’s end.

Following the ousting of Sudanese president Omar al-Bashir, the Saudi and Emirati crown princes and Sisi declared support for the military, which faces a popular revolt unless it cedes power to civilians. The military council responded by pledging Sudan will continue to deploy aircraft and ground forces to bolster Saudi and Emirati forces fighting in Yemen.

Most Sudanese infantrymen belong to the Janjaweed tribal militia, which recruits child soldiers and is responsible for war crimes during the ongoing 16-year Darfur rebellion of the country’s non-Arab population.

After assuming power upon his father’s enthronement in 2015, Crown Prince bin Salman, then 29, has been encouraged by his Emirati partner, who is 25 years his senior, to adopt other risky regional policies.