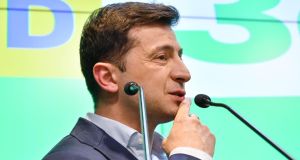 Ukrainian comedian and president-elect Volodymyr Zelenskiy: Ukrainians “would soon find out the truth” about the Donbas region and Russia’s annexation of Crimea. Photograph: Genya Savilov/AFP

Aides to Ukraine’s president-elect Volodymyr Zelenskiy laid out key planks of his anti-corruption agenda on Tuesday, as his election victory shook the country’s political scene and triggered early jockeying for autumn’s parliamentary polls.

Mr Zelenskiy took 73 per cent of votes in Sunday’s election to rout incumbent Petro Poroshenko, as Ukrainians backed his promises to fight graft, end the impunity of officials and make politics more open, accessible and honest.

The political novice, who found fame and popularity as a comedian and playing a fictional president on television, expects to face strong opposition from businessmen and politicians who for decades have worked together to accumulate profits and power.

Mr Zelenskiy is expected to take power next month and is likely to face a baptism of fire as influential political players – including Mr Poroshenko – try to block his party’s efforts to win a majority in October’s parliamentary election.

“Deputies’ immunity from prosecution should become a thing of the past; the NAPC [national agency for prevention of corruption] should be relaunched and hopefully also the office of the special anti-corruption prosecutor, or at least its leadership,” said Halyna Yanchenko, an adviser to Mr Zelenskiy on anti-graft issues.

Ms Yanchenko, who helps oversee the work of Ukraine’s national anti-corruption bureau, complained that a wide range of agencies now had the power to investigate alleged financial and economic crimes, leading to meddling and graft.

“We should get rid of all that, so people can develop, and develop the economy,” she told Ukraine’s Hromadske television station.

“So [we should create] a single agency that will deal with economic and financial cases, and business will do what it should – develop the economy.”

Meanwhile Ivan Aparshyn, Mr Zelenskiy’s adviser on defence matters, said “people will be jailed” for corruption in the defence sector that has hampered the military during five years of undeclared war with Russia.

“I can absolutely assure you that all those who are somehow connected to many semi-legal schemes . . . and abuses of the supply system for the Ukrainian armed forces, will not escape responsibility,” he told the Obozrevatel news outlet.

He also said Ukrainians “would soon find out the truth” about the military’s worst defeats at the hands of Moscow-led militants in the Donbas region and Russia’s annexation of Crimea after Ukraine’s 2014 Maidan revolution.

“No one intends to hide anything from anyone. And officials who took – or completely failed to take – decisions will be brought to justice,” he added.

Mr Poroshenko has offered to help Mr Zelenskiy in his new role, but the president-elect’s spokesman Dmytro Razumkov said he expects the outgoing leader to make life difficult for the newcomer.

“It’s not an easy path that we have to follow together. And we’ll make it happen, no matter what spokes they put in our wheels.”

Mr Poroshenko has vowed to fight hard in the parliamentary poll and return to the presidency at the next elections.

Prime minister Volodymyr Groysman has announced that he will compete in the October elections with a new party, however, rather than with the eponymous bloc of erstwhile ally Mr Poroshenko.