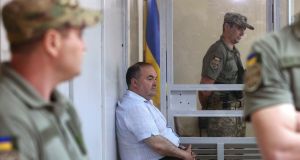 Boris Herman, who according to Ukrainian authorities is a suspect in a plot to murder Russian journalist Arkady Babchenko, at a court hearing in Kiev, Ukraine. Photograph: Reuters/Volodymyr Hontar

The journalist who came back from the dead, the former monk who was hired to kill him, a suspect who claims to be a secret agent and an alleged mastermind who works for a “Putin fund” in Moscow.

Three days after Arkady Babchenko walked into a Kiev press conference on his own apparent murder, a tale that has transfixed many in Ukraine and abroad is gaining characters and twists.

The Russian reporter, who fled his homeland for Kiev last year after receiving death threats for his criticism of the Kremlin, was reported to have been shot dead at his apartment in the city on Tuesday night. The first news of the shooting came from his wife, and later pictures of his blood-stained body were posted online.

On Wednesday, however, he announced that his death had been staged, the blood had come from a pig, and he had watched breaking news of his demise on the television of a morgue in the Ukrainian capital.

Ukraine’s SBU security service says it needed those behind the plot to believe Babchenko was dead so they would keep communicating and reveal more about their co-conspirators and an alleged hit list of some 30 other Russian exiles.

SBU agents on Wednesday arrested Boris Herman, the executive director of a Ukrainian-German arms manufacturer in Kiev; he is accused of being the organiser in Ukraine of a multiple-murder plot devised by Russia’s secret services.

At his detention hearing, however, Mr Herman claimed he was actually working with Ukrainian counter-intelligence to expose Moscow’s plans, and suggested that he could be the victim of a turf war between rival security agencies.

He admits that he did indeed ask someone to kill Babchenko, but only on the request of Ukrainian counter-intelligence agents who sought more information on Russian efforts to destabilise Ukraine.

He says he chose Oleksiy Tsymbalyuk – a former Orthodox monk who fought for government forces against Russian-led separatists in eastern Ukraine – because he knew he would never kill Babchenko and would go straight to the SBU.

The SBU says that Mr Tsymbalyuk did indeed tell them about Mr Herman’s proposal and collaborated in the fake murder sting – but the agency denies that the businessman has anything to do with Ukraine’s counter-intelligence operations.

In court, Mr Herman said he had been approached six months ago by an “old acquaintance” now in Moscow called Vyacheslav Pivovarnik, who “works for a private Putin fund and deals with organising unrest in Ukraine”.

“And counter-intelligence gave me a chance to find out how caches of weapons are built up here, how money flows come in [from Russia],” he added.

Pivovarnik has not commented on Herman’s claims, but Kremlin spokesman Dmitry Peskov on Friday dismissed them and any connection to Russian president Vladimir Putin as a “red herring”.

“Seriously speaking, there are no such funds in Russia, of course, and any allegations about Russia’s possible involvement in this false flag are nothing more than insinuations, and they have nothing to do with reality,” he said.

For the SBU and top Ukrainian officials, pride at having scotched an alleged Russian plot in such extraordinary fashion was quickly tempered by criticism – mostly from abroad – about their use of ‘fake news’ in the operation.”

Media watchdogs were outraged, Russia called the case a “propaganda” exercise and many international commentators said Ukraine’s reputation had been damaged at a time when it desperately needs western backing in its multi-faceted conflict with Moscow.

On Friday, SBU chief Vasyl Hrytsak and prosecutor general Yuriy Lutsenko defended their handling of the affair to diplomats in Kiev from EU members, G7 states and other countries.

Much of Ukraine’s credibility now rests on whether the allegations can be proven, and its record in major cases is dismal.

The security service members who killed dozens of protesters on Kiev’s Maidan square in 2014 are still free, as are whoever blew up Russian journalist Pavel Sheremet in the city in 2016, and shot dead prominent activist and volunteer fighter Amina Okuyeva in 2017.

In the last year Mr Lutsenko has accused both Mikheil Saakashvili and Ukrainian deputy Nadiya Savchenko of plotting coups in Ukraine; the charge against the former Georgian president now appears to have been dropped, and critics say the Savchenko case is fabricated and doomed to fail.