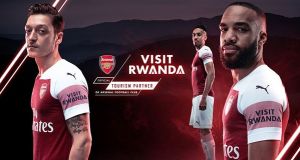 Arsenal players in the the club’s new shirt for next season. Photograph: Arsenal FC

Politicians in the Netherlands – which pays tens of millions of euro a year in aid to Rwanda – are up in arms over a €34 million deal between the Rwandan government and English Premier League club Arsenal to advertise the country as a tourist destination on its players’ new kit.

MPs from prime minister Mark Rutte’s Liberal Party have asked aid minister Sigrid Kaag to look into the deal – which one GreenLeft deputy described as “particularly disheartening” because the Netherlands had been to the fore in helping rebuild Rwanda since the 1994 genocide.

The three-year deal will see “the Gunners” – the most popular Premier League team in east Africa – sport the words “Visit Rwanda” on their shirt sleeves from the new season in August until 2020-2021, according to the Rwandan Development Board (RDB).

Rwandan president Paul Kagame is an Arsenal fan and was an outspoken critic of former manager Arsène Wenger, who recently departed the club.

“We’re thrilled to be partnering with Arsenal and showcasing the best of Rwanda in a campaign we know will attract both tourists and investors”, said RDB chief executive Clare Akamanzi. She refused to confirm the cost of the sponsorship at £10 million (€11.4 million) a year.

Tourism was Rwanda’s largest foreign exchange earner, she said, attracting 1.3 million visitors in 2017, supporting 90,000 jobs, and contributing 6 per cent a year to GDP. “We want to show Rwanda to a global audience in a new and dynamic way,” she added.

It is that tension between the old and the new Rwanda that’s at the heart of what is, in terms of developing countries, certainly an unprecedented deal.

While Rwanda is the most densely populated country in Africa, with 57 per cent of Rwandans living below the poverty line and the population still growing by 3 per cent a year – overseas aid is also making itself felt in long-awaited economic growth.

“We will be telling investors to Visit Rwanda and discover a country with the second-fastest growing economy in Africa, at 7.3 per cent a year,” said Ms Akamanzi.

In that sense, the point of the deal, according to an Arsenal spokesman, is that “the Arsenal shirt is seen 35 million times a day around the world” and the Visit Rwanda shirt will be worn by the club’s first team, under-23 side and the women’s team.

However, as the Dutch begin to investigate, GreenLeft MP Isabelle Diks said: “When the international community is making such efforts to tackle terrible poverty in Rwanda, a deal like this seems so wrong.”

Rwanda is among the six top beneficiaries of Dutch aid, along with Syria, Ethiopia, Bangladesh, Afghanistan and South Sudan, receiving €189 million between 2014 and 2017.