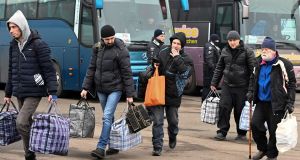 Ukraine has completed a major prisoner swap with Russian-led separatists for the first time in two years, despite criticism that it was allowing alleged killers to go free in its bid to secure a peace deal with Moscow.

The office of Ukrainian president Volodymyr Zelenskiy said on Sunday that 76 people had returned to government-controlled territory from militant-held areas of the Donbas region in eastern Ukraine. Serhiy Syvohko, an adviser to Ukraine’s national security council, said Kiev had handed over 127 people to the separatists.

The exchange was agreed between Mr Zelenskiy and Russian president Vladimir Putin when they met for talks in Paris this month, to discuss a five-year war in Donbas that Ukraine’s president vowed to end when he took power in May.

Western powers welcomed the exchange but the inexperienced Mr Zelenskiy – who was a comedian before plunging into politics this year – faces questions from Ukrainians who accuse him of making dangerous concessions to Russia.

Among those freed by Kiev were five former members of the Berkut riot police unit who were charged with involvement in the murder of dozens of protesters during Ukraine’s 2013-14 revolution, which tilted the country to the west and prompted the Kremlin to annexe Crimea and foment the war in Donbas.

Three people convicted over the deadly bombing of a 2015 pro-revolution march in the eastern city of Kharkiv were also reportedly handed to the separatists at a frontline checkpoint.

“Some of our prisoners will return home... Some will remain in the militants’ hands. Crimean Tatars and other political prisoners will continue to sit in Russian jails,” said Oleh Sentsov, a filmmaker from Crimea who was among dozens of detainees who returned to Ukraine in a direct swap with Russia in September.

“For this, Ukraine is handing over genuine killers: Russian mercenaries, Kharkiv terrorists and five Berkut officers,” he added, saying that the “justice” that Ukrainians died for during the revolution was being betrayed.

“The country should bring back its heroes, but not at the cost of desecrating the values that heroes fought for... After nearly six years, we have started to return to the point from which everything began, and what Ukrainians fought for is turning to dust.”

More than a dozen non-governmental groups campaigning for reform and against corruption also warned in a statement that the release of people accused of major crimes as part of a political deal posed a threat to Ukraine’s fragile rule of law.

The US embassy in Kiev also welcomed the prisoner swap and noted that “Russia’s ongoing aggression confronts Ukraine’s leadership with difficult choices”.

The Kremlin said Mr Putin “gave a positive assessment” of the exchange in a phone conversation with Dr Merkel.

Mr Putin insists he wants to help end a war that has killed more than 13,000 people and displaced some 1.6 million, but several of Russia’s key demands for a final settlement are unacceptable to Ukraine.