Turkish president wants to raise ‘pious generation’ of young, but many disagree 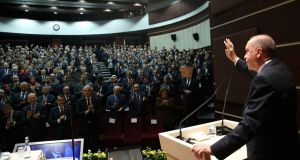 On the surface, Ayla looks like a model young conservative of the kind that would make Turkey’s President Recep Tayyip Erdogan proud. A graduate of one of Turkey’s imam hatip religious high schools, the 23-year-old can still recite parts of the Koran by heart. She lives in a gender-segregated university dormitory with a curfew and strict rules.

But privately she has shunned the values her parents and the ruling party would like her to uphold. She describes herself as agnostic. When far from home, she takes off her headscarf. Occasionally, she drinks alcohol. “Conservative families right now cannot keep up with the modern world,” she said. “This religious conservative upbringing is outdated.”

Ayla, who asked to be identified by a pseudonym, is a symbol of the limits of Erdogan’s efforts to shape Turkey in his image. The Turkish president has often said he wants to raise a new “pious generation” of young people – a move that is part of a wider effort to shift the nation away from the legacy of his nation’s arch-secularist founding father, Mustafa Kemal Ataturk. Speaking to his party’s youth branch in 2012, he set out his vision of an ideal young citizen with “a Koran and a computer” in their hands.

At the forefront of his effort to reshape society has been education. Erdogan has increased funding for Turkey’s religious affairs directorate, which lays on Koran courses for students across the country. Since 2011, he has tripled the number of imam hatip high schools, which place a strong emphasis on religious studies. And in mainstream schools, steps have been taken to curb the teaching of evolution and boost the number of hours devoted to religion.

Yet, despite this drive, there is evidence the project is having limited success so far. A survey of 5,800 people published last year by polling agency Konda showed that Turkish youth were less likely than the wider population to describe themselves as “religious conservative”. They were also less likely to say that they fasted or prayed regularly, or that they covered their hair.

The same survey found that those aged 15-29 were not only less religiously conservative than their elders, but also less so than the same age group a decade earlier. “Erdogan aggressively expanded religious education . . . But, paradoxically, people are getting less religious, especially younger segments of the population,” said Gul Ozyegin, a sociologist based at the College of William and Mary in Virginia, US. “The outcome must be hugely disappointing [for the ruling party].”

Erdogan’s push for a pious generation is relatively recent, beginning in earnest in about 2011 as he embarked on his third term as prime minister. If the 65-year-old, who became president in 2014, remains in power for many more years, he may make further inroads in his efforts to mould society.

But, given that half the population is under the age of 32, even relatively small shifts among the country’s youth could have worrying political ramifications for Erdogan and his Justice and Development party (AKP). Members of parliament from the ruling party privately admit that they have difficulty in drumming up enthusiasm among young people, many of whom do not remember the “bad old days” that their parents associate with the pre-AKP era.

Pollsters said that Ekrem Imamoglu, the opposition candidate who won election as mayor of Istanbul last year, drew his support disproportionately from the city’s youth.

The AKP’s effort to forge a new generation of young religious conservatives has been undermined by the party’s own actions, said Ihsan Eliacik, a left-wing Islamic theologian who is fiercely opposed to the government. “People saw that, even though they claim to be Muslims, they committed the worst sins,” he said, accusing the ruling party of human rights abuses and corruption.

Hafize Cetinkaya, a Turkish teacher from the city of Konya whose father is a long-term AKP supporter, believes the ruling party is “hypocritical”. The 27-year-old added: “What the current government is doing goes against religious values. I do not feel close to them.”

Many young people cite social media as an important factor in shaping their outlook. Busra Cebeci, the daughter of AKP supporters who grew up in a conservative town near the Black Sea, said that, as a teenager, Twitter opened her eyes.

“I would see all the opposing views coming from different people,” said the 25-year-old journalist for an opposition news outlet. “I started questioning, and asking: what side do I belong on?”

For Ayla, the turning point came when she volunteered at a charity where she was exposed to discussions about women’s rights. Her interest piqued, she began reading voraciously and sought out like-minded young women online.

At the moment, her parents are in the dark about how far she has drifted away from their values, but she said that they will eventually find out. “My family will, of course, want me to get married,” she said. “But when I graduate and have economic freedom, it’s not going to happen.” – Copyright The Financial Times Limited 2020