Tsipras under pressure at home as Athens races to finalise proposals 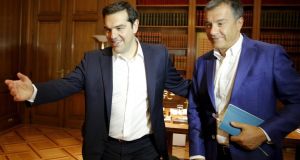 Greek prime minister Alexis Tsipras came in for criticism at home as his government raced to finalise a package of reforms aimed at keeping Greece in the euro zone. With its banks closed, cash withdrawals rationed and the economy in freefall, Greece has been given just days by international lenders to present reform proposals that would persuade them to agree to a new bailout.

The government submitted a request to the European Stability Mechanism bailout fund to lend an unspecified amount “to meet Greece’s debt obligations and to ensure the stability of the financial system”.

In a forceful speech that nonetheless left room for compromise on key stumbling blocks, notably debt relief, Mr Tsipras told the European Parliament he wanted a fair deal and acknowledged Greece’s “historic responsibility” for its plight, but he warned against efforts to push Greece into “never-ending austerity”.

“We are determined not to have a clash with Europe but to tackle head on the establishment in our own country and to change the mindset which will take us and the euro zone down,” he said. His government promised to begin implementing tax and pension measures sought by creditors as early as Monday.

Mr Tsipras has been strengthened at home by the emphatic victory of the No side in last Sunday’s referendum on the creditors’ cash-for-reforms proposals. However, a temporary truce between his government and the opposition, which resulted in an unprecedented joint statement on Monday, has begun to show signs of strain.

Evangelos Meimarakis, who took interim change of the conservative New Democracy after the resignation of its leader, Antonis Samaras, on Sunday, said the party’s “tolerance” for and “confidence” in Mr Tsipras and his government had almost reached its limits.

Urging him to sign the agreement tabled before the referendum, Mr Meimarakis questioned Mr Tsipras’s strategy, urging him to brief MPs on the progress of the talks and querying his decision to address the European Parliament. “Who advised him to give a voice to enemies?” he asked, referring to the hostile speeches against Greece delivered by a number of MEPs in Strasbourg.

The government in turn rebuked Mr Meimarakis, saying he should avoid “publicity-style initiatives at the most critical moment in the negotiations”.

Stavros Theodorakis, leader of the centrist Potami, the fourth largest party in parliament, said: “We are now fighting for Greece to remain in the European Union. ” Greece and its government were being “badly served” by “those fools who cultivate scenarios of rupture and a return to the drachma”, he said.

Mr Theodorakis said the government had to submit proposals that would ensure Greece remained in the EU. “Anything else would be betrayal and viewed as treason by the Greek people,” he said.

The political brinkmanship in Brussels dominated the front pages of the Athens press, with most newspapers focusing on the dilemma now facing Mr Tsipras and his party. “Euro or drachma on Sunday,” proclaimed the conservative Kathimerini. In a front-page leader, the paper said Mr Tsipras and his former finance minister, Yanis Varoufakis, had gambled with the country and lost. Now that the truth had emerged, Mr Tsipras had two options, it suggested: to ignore his party and do what he must out of a patriotic duty or to propose a government of national unity to arrange and implement an agreement.