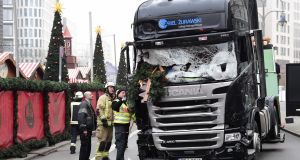 The truck that crashed into a Christmas market in Berlin on December 19th, 2016. Twelve people were killed in the terror attack, with the German government since criticised for how it has treated relatives. Photograph: Tobias Schwarz/AFP/Getty Images

A year on, Peter Cizmar will be reunited with his wife Nadja on Tuesday, but in name only: carved into stone steps alongside 11 others on Berlin’s Breitscheidplatz.

A year ago on Tuesday, all lost their lives when Islamic State sympathiser Anis Amri stole an articulated lorry and crashed it into the crowded Christmas market in the shadow of the Kaiser Wilhelm Memorial church.

Its ruined tower, left standing as a memorial to the horrors of war, will get a second memorial on Tuesday: the names of the dead in the steps and a symbolic jagged crack, filled with gold.

For the relatives of the dead, and the 70 injured, it has been a long and painful road to this simple memorial. Above all because it took German chancellor Angela Merkel a full year to finally meet them.

“For me it is important to make clear today how much we empathise with the relatives, with the injured,” said Merkel, ahead of their meeting on Monday.

Empathy is exactly what relatives of the Berlin Christmas market dead say is lacking in Germany.

In a furious open letter to Merkel, relatives wrote of battles with German bureaucracy immediately after the attack, of dazed days when everyone and no one was responsible for helping them. They recall a letter of condolence from Berlin’s mayor sent nine weeks after the attacks, long after the postmortem bills had landed – payable within 30 days. Merkel never contacted anyone.

A year ago, Peter Cizmar thought nothing of it when he couldn’t reach his wife Nadja by phone.

“It was always out of juice or switched off,” said the physicist, who lives in Braunschweig, an hour away. Alerted by a friend of the events in Berlin, where Nadja worked during the week, he phone a Berlin police hotline but was told they were “busy”.

The 39-year-old headed to Berlin, found her apartment empty, and failed to get any information on his rounds of hospitals and police stations. When he filed a missing person’s claim the next day, no one in the police station told him they had already recovered Nadja’s wallet at the attack scene. A day later, without explanation, he was asked to provide samples of her DNA, fingerprints and dental records.

“I knew that wasn’t good news. Either she was dead or so injured she couldn’t say her name,” he said to Berlin’s RBB television.

Three days after the attack, he learned – finally – that his wife would never return home to him and their son. Other relatives tell similar stories of being left dangling by police and ignored by politicians.

Things looked very different abroad. Five of the 12 victims were non-German citizens: in Italy, the president received victim remains personally; in Poland, the president kneeled before the coffin of Lukasz Urban, murdered by Amri and his truck used in the attack.

Urban’s parents have accused the German leader of a “lack of respect” for not expressing her condolences personally.

“I would like to say to Mrs Merkel that she has my son’s blood on her hands,” said Janina Urban to Deutsche Welle television. Her husband Henryk dismissed the Berlin memorial as pointless.

“What sort of a symbol is that supposed to be: a name on a step?” he asked.

After growing pressure from relatives and unflattering media coverage, the federal government appointed an ombudsman for survivors and relatives of the attack dead.

In future, the report said, attack scenes must have a clearly signposted contact point for relatives, a permanent ombudsman for relatives and victims, and more generous compensation.

A year on it’s far less clear what lessons Germany’s decentralised police and investigators – an often problematic pillar of the post-war federal system – have learned.

Relatives claim their loved ones died because of “competence chaos” among least 50 bodies who “shared information poorly”. Amri, a failed asylum seeker from Tunisia, claimed welfare under a dozen aliases. Despite warnings from investigators in the western state of North Rhine-Westphalia, where he was officially registered as an asylum seeker, Berlin special investigators engaged in a half-hearted monitoring during the week, not at all at weekends, and declined to respond to queries from other police forces.

Berlin police and investigators, widely praised by politicians immediately after the attack, have come off particularly badly from post-attack investigations. They missed several warnings to detain and deport Amri, and tried to bury their mistakes. Germany’s federal states have refused reform demands to improve co-ordination of inter-state crime.

For many Berliners remembering last year’s terror attack on Tuesday, the flagrant failings at official level – sloppy police work and tactless politicians – are the lingering scandal of Breitscheidplatz.