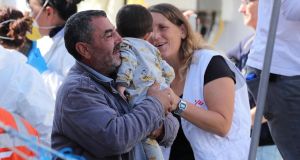 A man holds a child as they disembark from the Aquarius ship of Sos Mediterranee upon its arrival in the Sicilian port of Palermo, southern Italy, today. About 600 migrants were brought to Sicily after being rescued at sea off the Libyan coast. Photograph: Igor Petyx/ANSA via AP

People traffickers have changed their routes and strategies for smuggling migrants into Europe following the clampdown by border police in EU countries sparked by mass migration from the Middle East and North Africa since 2015.

A new report from the EU policing agency, Europol, identifies what it says are “rapidly developing trends” showing that rather than being a place where they aim to settle, Europe is now frequently a “transit region” for migrants attempting to reach the United States and Canada.

The research also shows that instead of trying to make it across the Mediterranean, many migrants are being persuaded to choose what can be an even more life-threatening route through the Black Sea, usually from Turkey to Romania.

Last month, five fishing boats were stopped by Romanian coastguards, the first carrying 97 Iranian and Iraqi migrants, 36 of them children. The second vessel was carrying 87 persons, the third 68, the fourth 150 Syrians and the fifth 69 Iraqis.

The Romanian authorities have made six arrests on suspicion of human trafficking in connection with those vessels, detaining two Turks, a Syrian, a Bulgarian, an Iraqi and a Cypriot.

However, because Romania is not part of the Schengen passport-free zone, it remains a way station to Western Europe for the migrants.

According to the EU border protection agency, Frontex, weather conditions in the Black Sea are often worse than in the Mediterranean. “People underestimate the sea here, but it is notoriously dangerous, with strong winds, especially bad for smaller vessels,” said a spokesman.

Frontex said in September that although there had been several incidents in a short period, it was too early to regard them as a change in trend. However, Europol now says it’s one of a number of new trends showing that migrants are more desperate than ever to evade tougher border controls.

As the Europol report was published, a rescue ship docked in Sicily carrying 606 migrants from 20 countries picked up in just two days off the Libyan coast, indicating that the Mediterranean crisis shows no sign of abating.

“Migrant smuggling is now a big and dangerous business in Europe,” said Europol director Rob Wainwright. “Because there’s increased pressure from law enforcement, the criminal gangs behind this trafficking are resorting to ever more desperate measures.”

Among the other changes identified by Europol is an increasing use of leisure vessels, typically yachts, for bringing migrants from Turkey to Italy, and an increase in the numbers travelling via the western Mediterranean to Spain.

With a high chance of detection come even more extortionate prices charged by the smugglers. In one example, the Europol report says migrants have been paying as much as €7,000 for a one-way trip from Turkey to Austria.

The hiding places are becoming more dangerous too, with people often squeezed into the space between the engines and the bonnets of the lorries smuggling them through border crossings, running the risk of asphyxiation.