Refugees from Myanmar were in sight of land when vessel shipwrecked, says official 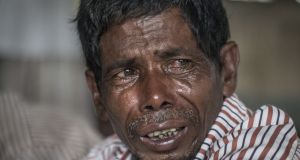 A Rohingya Muslim refugee mourns beside the body of his child near Inani beach in Cox’s Bazar district. File photograph: Fred Dufour/AFP/Getty Images

More than 60 people are feared dead following the shipwreck of a boat carrying Rohingya Muslims fleeing from violence in Myanmar to Bangladesh, the UN migration agency said.

The figure came as the UN Security Council had its first open meeting on Myanmar for eight years amid clear divisions among its members.

Spokesman Joel Millman of the International Organization for Migration told reporters in Geneva that 23 deaths had been confirmed after eight more bodies were found overnight following an initial count of 15.

Based on interviews that the organisation has conducted with survivors, Mr Millman said: “We believe 40 are missing and presumed drowned” on the vessel, which was thought to have been carrying about 80 people.

Mr Millman said the refugees were in sight of land when their ship was wrecked.

The Bangladeshi captain had not charged the passengers any fee for the transport and had been trying to avoid sea patrols or checkpoints, he said.

“The details are absolutely astonishing and remarkable,” Mr Millman said. “At one point, he [the captain] chose to anchor the vessel, but that proved to be a fatal mistake as the rough seas were much worse than he supposed.

“This was easily within sight of land.”

“People were actually quite distraught that they had gotten so close to safety and yet drowned because the boat was destroyed by the high seas and the torrential rains and wind,” he said.

He said he did not have information immediately about whether it was the worst death toll at sea since the exodus of Rohingya began on August 25th amid violence targeting them.

More than 500,000 Rohingya have fled Myanmar, formerly known as Burma, to Bangladesh since then.

The “very tragic” accident involved a vessel that had been at sea for two days with no food and had faced choppy seas, Mr Millman said.

The UN Security Council’s first open meeting on Myanmar for eight years highlighted deep divisions, with China and Russia supporting the southeast Asian country’s government and the US, Britain and France demanding an end to “ethnic cleansing” of its Rohingya minority.

US ambassador Nikki Haley told council members in New York: “We cannot be afraid to call the actions of the Burmese authorities what they appear to be: a brutal, sustained campaign to cleanse the country of an ethnic minority.

“The time for well-meaning, diplomatic words in this council has passed,” she said.

“We must now consider action against Burmese security forces who are implicated in abuses and stoking hatred among their fellow citizens.”

Ms Haley urged all countries to suspend the supply of weapons to the country’s military until its members are held accountable for the “brutal assault” on the Rohingyas.

The US, Britain and France were joined by many council members in demanding an immediate end to the violence and a strong response.

A global coalition of 88 civil society and human rights organisations urged the security council to step up pressure on Myanmar’s authorities “by seriously considering options such as an arms embargo against the military and targeted financial sanctions against individuals responsible or crimes and serious abuses”.

China and Russia supported the Myanmarese government’s approach to tackling the crisis.

China’s deputy UN ambassador, whose country has close ties to Myanmar, urged the international community “to view the difficulties and challenges confronting the government of Burma through objective optics, exercise patience, and provide support and help”.

Wu Haitao stressed “many of the differences and antagonisms” in Rakhine state have been building up over a long time and “there is no quick fix”.

“As we speak, the situation on the ground is beginning to move toward stability,” he said.

“All parties should work constructively to help reinforce this momentum, de-escalate the situation and alleviate the humanitarian conditions step by step.”

Russia’s UN ambassador, Vassily Nebenzia, warned “excessive pressure” on the government “could only aggravate the situation in the country and around it”.

There is no alternative to resolving “the long-standing and complicated crisis” in Rakhine through political means and a dialogue among representatives of all nationalities and faiths,“ he said.

“We need to stop any kind of violence from any side and the rhetoric which fuels it.”