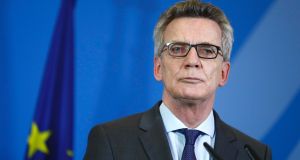 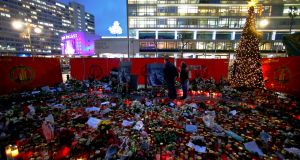 Flowers and candles at the former Christmas market at Breitscheid square in Berlin, Germany following the attack in December which killed 12. Photograph: Hannibal Hanschke/Reuters

Two weeks after Germany’s first serious Islamist-related attack, Berlin has posed its citizens a challenging question: What are you more afraid of? A slip back to old Nazi terror or slide into a new era of Islamist violence? If the latter worries you more than the former – and two thirds of Germans say further Islamist attacks are their number one worry – then Germany needs to overhaul how it fights crime and keeps people safe.

But doing so will require open-heart surgery on 70-year-old federal structures in Germany that, similar to the US, distribute power between federal government in Berlin and 16 federal states.

State police do most of the police work while federal police – the Bundespolizei – are mostly preoccupied with securing train stations, airports and border areas. The Bundeskriminalamt – BKA – is Germany’s FBI equivalent but has comparatively few powers to take over an investigation. And the federal domestic intelligence agency, the BfV, is largely reliant on the goodwill of 16 state intelligence agencies to share information.

This division of labour means that, if you are a criminal with big plans, the easiest way to escape detection in Germany is to live on the road. That’s what the three-member neo-Nazi NSU group did, killing 10 and escaping detection for a decade thanks to incompetence and turf wars among various state and federal investigators, who never pooled their knowledge.

Federal interior minister Thomas de Maizière fears Islamic State will exploit this decentralised structure. His most far-reaching proposal: to merge Germany’s 16 state intelligence agencies into one federal entity. Enemies of Germany’s constitutional order have the entire country in their sights, he pointed out gently on Monday, not an individual state such as Saxony.

But status quo defenders say Germany’s unique system has served the country well. They point to France, with its long series of terrorist attacks, as proof that centralisation does not guarantee greater security. Improved information-sharing – not centralisation – is the best answer to new threats, they say.

But this is also an opening gambit, a test of Germans’ traditional suspicions of central government. In the face of a rising Islamist threat, old fears are dwindling and, with it, the most extreme elements of postwar German federalism.