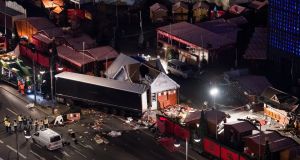 The truck involved in the fatal attack on a Christmas market in Berlin earlier this month is prepared for removal afterwards. File photograph: Bernd Von Jutrczenka/EPA

A Polish truck driver whose hijacked vehicle was used to crash into a Berlin Christmas market was shot in the head several hours before the attack and could not have attempted to foil it, as had previously been thought, Bild newspaper reported on Tuesday.

The newspaper quoted a confidential coroner’s report that said driver Lukasz Urban (37), had suffered not only knife wounds in the cabin but also a gunshot wound to the head between two and four hours before the 8pm attack.

There was as yet no confirmation of the Bild report available.

A total of 12 people were killed in the attack on Monday of last week.

The Tunisian assailant, 24-year-old Anis Amri, was shot dead by Italian police on Friday amid a Europe-wide manhunt.

In a video released after his death, he is seen pledging his allegiance to militant group Islamic State leader Abu Bakr al-Baghdadi.

The Berlin state interior minister Andreas Geisel had said on Friday that Mr Urban had “quite probably” tried to disrupt the attack by seizing control of the steering wheel before being shot in the head after the truck had veered to the left into the market. It came to a halt after moving just 60 metres into the market, which extended to a length of more than 400 metres.

This helped start a crowdfunding campaign that raised more than €162,500 for Mr Urban’s family.

The campaign was started by British truck driver Dave Duncan a day after the Berlin attack.