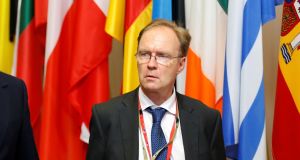 Britain’s ambassador to the European Union has resigned unexpectedly, just three months before the start of formal Brexit talks, and weeks after pro-Brexit media accused him of being too pessimistic about the process of leaving the EU.

Ivan Rogers, one of the British diplomatic service’s most experienced EU experts, surprised colleagues on Tuesday by announcing that he would leave his post almost a year earlier than planned.

A government spokesman said Sir Ivan was stepping down early to make way for a successor before prime minister Theresa May triggers article 50 of the Lisbon Treaty. But his decision follows a deterioration in the ambassador’s relationship with Ms May’s team, particularly after the leak of a memo last month in which he warned that it could take almost a decade for the EU to agree and ratify a new trade deal with Britain.

Opposition politicians described Sir Ivan’s resignation as a serious blow to Britain’s negotiations with the EU and evidence that the prime minister was allowing ideology to trump expertise.

Former Liberal Democrat leader Nick Clegg said Sir Ivan had always been “punctiliously objective and rigorous” in the advice he gave to government.

“If the reports are true that he has been hounded out by hostile Brexiteers in government, it counts as a spectacular own goal. The government needs all the help it can get from good civil servants to deliver a workable Brexit,” he said.

Labour’s Hilary Benn said the resignation had come at a crucial moment, as the British government decides on its negotiating strategy for Brexit.

“The hard work is going to start very soon, because if article 50 is triggered, as the government says it wishes to, by the end of March, then negotiations will probably begin shortly thereafter. And having a handover in the middle of that, depending on when exactly he goes, is not ideal,” he said.

Brexiteers welcomed the ambassador’s resignation and Nigel Farage suggested that other senior diplomats should follow suit, calling for “a complete clear-out” of the foreign office.

A former treasury official, Sir Ivan was head of Leon Brittan’s cabinet at the European Commission and served as one of the top EU advisers to two prime ministers, Gordon Brown and Tony Blair. Last month’s leaked memo was a report to the government on what other EU member-states were saying about how long a trade deal might take to be secured after Brexit. But it was characterised in parts of the pro-Brexit media as representing Sir Ivan’s own views, leading to accusations that he was taking an excessively gloomy view of Britain’s negotiating prospects.

Margaret Beckett, a former Labour foreign secretary, said the ambassador’s resignation represented a crisis for the government. “If, as it appears, he is lost because he gave honest advice, that is not a good precedent. I think it is a crisis for the prime minister and for the Foreign Office. It is deeply alarming,” she said.