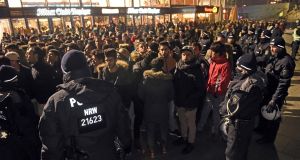 This year began again under a cloud for Cologne police, accused this time of doing too much to prevent a repeat.

In the last hours of 2016, police in the western German city stopped and checked the IDs of hundreds of young men of “apparently” north African origin – “Nafri” in police jargon.

The men were taken off trains shortly before Cologne or rounded up in a square before the city’s main station.

On Monday the city’s police chief, Jürgen Mathies, said he “regretted hugely” the use of the term “Nafri” in a Tweet sent out at 11.08pm on December 31st, but defended the round-up as crucial to the force’s security concept.

“We had a clear idea of who we should be checking – it wasn’t grey-haired old men or blond young women,” he said.

“That the persons looks similar and were similar from their behaviour it was possible to establish early what they had planned,” said the police chief, saying the force had information of plans similar to last New Year’s Eve.

Then, hundreds of women were groped and raped by men, including foreign nationals and asylum seekers.

Police claims that events had passed off peacefully in the city prompted a social media outcry by women affected, forcing the then police chief to resign.

On Monday a spokesman for Cologne police defended the use of racial profiling, saying people were “stopped according to a particular phenotype”.

Asked to explain that term, another spokesman said: “Everyone knows what a north African looks like.”

This sparked fury among left-wing politicians, who accused police of institutional racism for assuming anyone who “looked” north African was a potential rapist and could not be a German citizen.

Green Party co-leader Simone Peter said she understood police obligation to secure the Cologne celebrations, but said detentions based on appearance were possibly illegal and the term “Nafris” derogatory.

Satirist Jan Böhmermann asked police publicly on Twitter to explain “the difference between Nafris and Niggers”.

But their outrage prompted a backlash by Monday afternoon, with local media outlets defending the police for “only doing one thing: their duty”.

Bavaria’s immigration-critical Christian Social Union defended the police response, saying it had “nothing to do with discrimination” but the experience of last year. Cologne mayor Henriette Reker stood by the city police force, saying they found themselves in a dilemma on New Year’s Eve.

Police had only stopped people who were travelling in groups, she said, and these groups were mostly young men of northern African origin.

“If the police hadn’t controlled these groups and something had happened then the uproar would have been huge,” said Ms Reker.

“Everyone would have asked why the police didn’t control these groups more intensively, particularly after the experience of last year.”

Police in Cologne and the surrounding state of North Rhine-Westphalia say they have a growing problem with gangs of young men from Algeria, Tunisia and Morocco involved in pick-pocketing, drug dealing and harassing women.

The last months have seen growing public reservations across Germany towards immigrants, whether refugees or asylum seekers, particularly after a Tunisian man crashed a truck into a Berlin Christmas market last month, killing 12.

On Monday, police in Saarbrücken revealed they had arrested a 38 year-old Syrian man, accused of planning a New Year’s Eve attack in the western German city.