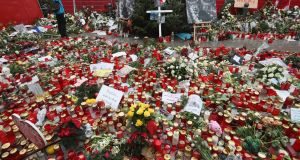 A memorial to victims of the December 19th terror attack at a Christmas market on January 3rd, 2017 in Berlin, Germany. Photograph: Sean Gallup/Getty Images

Germany’s growing terror threat has prompted calls for the most radical overhaul of the country’s decentralised police and intelligence services of the post-war era.

Two weeks after 12 people died in an attack on a Berlin Christmas market, federal interior minister Thomas de Maizière has argued that the Islamist threat demands a reweighting of police and anti-terror powers back in favour of Berlin.

Opposition and state politicians have sounded the alarm to his proposals, accusing Mr de Maizière of disregarding the lessons of the Nazi era, which shifted powers in policing and security matters away from Berlin to Germany’s 16 federal states.

But Mr de Maizière said his proposals, published in the Frankfurter Allgemeine daily on Monday, were about making Germany “fit for the future”.

“We are used to a normality and the absence of catastrophes. Our country is organised this way,” he wrote. “But times change and there many rules are lacking in Germany that are self-evident in other democracies.”

His proposals follow revelations that although the main suspect in the Christmas market attack was considered a serious security threat by state authorities in western Germany, this information was not shared with authorities in Berlin.

As well as federal policing, the minister said Germany’s lack of centralised bodies to deal with cyber attacks and national emergencies “creates a situation . . . for which, in extreme situations, the population would have no understanding”.

In a final taboo, the minister suggested lifting a domestic deployment ban on the Bundeswehr army, arising from Nazi use of the Wehrmacht on German territory.

Restrictions devised in the shadow of Germany’s fascist past were, the minister argued, no longer timely in the modern era of trans-national crime.

“Debates in previous eras might have been understandable,” he said. “Now they are no longer so.”

The FAZ proposals revived a call to transfer from state to federal control the expulsion of failed asylum seekers with criminal records, including the use of deportation holding facilities.

Mr de Maizière also made a series of EU policies: urging European partners to agree on a long-discussed common EU asylum policy and a common register of all movement in and out of the Schengen area.

It was crucial, he added, that the EU find a “structural answer” to ensure it is better equipped for future refugee waves than in the past.

The German minister proposed tightening up asylum laws to declare more countries states of “safe origin” – with lower asylum chances for its citizens – if they contain peaceful regions.

The EU and UN should work together to create asylum camps in exclaves within these safe regions, to where asylum seekers would be returned immediately and from where their applications would be processed.

The Berlin proposals prompted a swift and negative reaction from federal states, unwilling to hand over competences to central government. Among Germany’s left-wing parties, the proposals sparked outright hostility.

“This is a frontal attack on federalism that simply pushes aside the historical lessons of the Nazi era,” said Ms Ulla Jepke, interior spokeswoman for the Left Party.

Similarly negative was the reaction from Chancellor Merkel’s Bavarian allies, the CSU. After months pushing for a tougher immigration line, the Bavarians dismissed the proposals on Monday as a “distraction” from pressing security problems posed by Islamist extremism.

The proposals have also upped pressure on Dr Merkel’s Social Democratic (SPD) coalition partners, which has struggled since the December attacks to present a common law-and-order line.

On Monday SPD leader Sigmar Gabriel presented his own paper, emphasising the need for prevention through additional social spending in cities, education and jobs.