Israeli court bans screening of documentary about 2002 fighting in Jenin 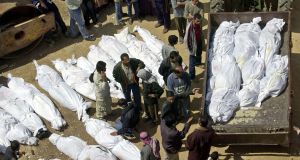 An Israeli court has ruled that screening or distributing the controversial documentary Jenin, Jenin should be banned and that all copies of it should be seized.

The director, Mohamed Bakri, a famous Israeli-Arab actor, was also ordered to pay €45,000 for defamation to an Israeli soldier who appears in the film as a participant in a battle in the West Bank refugee camp of Jenin in 2002.

Jenin, Jenin follows the fierce battle that took place in 2002, when Israeli troops entered the refugee camp during the second Palestinian intifada uprising in an effort to flush out militants following a wave of suicide bombings inside Israel. In a rare move, the Israeli military prevented journalists entering Jenin during the fighting, prompting rumours that a massacre had taken place.

Fifty-two Palestinians, the majority of them militants but including a large number of civilians, along with 23 Israeli soldiers, were killed during the 11 days of clashes. Israel strenuously denied Palestinian claims, which were repeated in the documentary, that troops perpetrated war crimes during the operation.

“At the end of the day, and looking closely, we are dealing with a defendant who found it appropriate to produce a film that purports to be a documentary, based on a group of interviews with those who are presumed to be residents of the Jenin refugee camp,” wrote judge Halit Silash in her ruling. “The evidence in this case shows that Mr Bakri consciously chose not to conduct an examination, even minimal, even preliminary, of the allegations and facts expressed in the same interviews.”

Mr Bakri said he intends to petition the high court to overturn the court ruling.

Knesset member Aida Touma-Sliman, from the predominantly Arab Joint List, said the ruling was “occupation under the auspices of the court”.

“It’s not the film that should be shelved, but the occupation and its crimes,” she said.

Israel’s culture minister Chili Tropper welcomed the court ruling as a “victory for honesty and truth”.

“Freedom of expression does not allow for false accusations and libel,” he said.

Jenin, Jenin was first screened in 2002, after the high court overturned the film censorship board’s decision to ban it. In an earlier court case, five soldiers filed a libel suit against Mr Bakri, saying the film libelled all the soldiers who fought in Jenin.

But judges rejected the suit, arguing that while the film indeed contains lies it doesn’t show or mention any of the plaintiffs specifically, and therefore, they cannot claim to have been libelled.

Mr Bakri’s lawyer argued during the protracted legal proceedings that his client was not trying to present a factual account of the battle but was merely showing the Palestinian narrative.