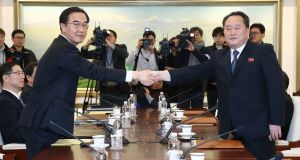 North Korea has offered to send a taekwondo martial arts team, cheerleaders and high-ranking officials to the Winter Olympics in South Korea next month after the first talks in over two years between the two Koreas.

In rare talks in the Panmunjom “peace village” in the heavily fortified demilitarised zone (DMZ) at the border, South Korea said it was prepared to temporarily lift some sanctions, in co-ordination with the UN, to facilitate the visit to the games in Pyeongchang.

However, North Korea rejected South Korea’s appeals for talks about abandoning its nuclear arsenal, saying it would negatively impact on inter-Korean ties.

“North Korea’s weapons are only aimed at the United States, not our brethren, China or Russia, ” said Ri Son-gwon, who led North Korea’s delegation at the talks.

Mr Ri added that Pyongyang’s nuclear programme was not an issue between North and South Korea.

The South Koreans proposed the two Koreas march together at the opening event, as they did at the Asian Winter Games in 2007.

The prospect of North Korea taking part in the Winter Olympics has sparked hopes of an easing of tensions on the Korean Peninsula, which has been divided since the Korean War (1950-53) ended without a peace treaty.

“North Korea proposed resolving issues regarding inter-Korean ties through dialogue and negotiations for peace and unity on the peninsula,” Mr Chun told a briefing.

North Korea last year staged its sixth and most powerful nuclear test and said it had developed a rocket capable of reaching the continental US. There was also an exchange of threats and insults between North Korean leader Kim Jong-un and US president Donald Trump, which rattled nerves in the region and raised fears of conflict.

Mr Trump labelled Mr Kim “Little Rocketman” and said his nuclear button was bigger than Mr Kim’s, while the North Korean leader described the US president as “a mentally deranged dotard”.

South Korea has also suggested family reunions for people separated by the Korean War during the Games, which are scheduled for February 9th to the 25th in Pyeongchang, about 180km east of Seoul.

The exchanges would take place during the Lunar New Year holiday, which falls during the Games and is considered a highly auspicious time in Korea.

Five senior officials from both sides are taking part in the talks, and leaders are watching the talks on a TV feed. The North agreed to the talks after South Korea and the US agreed to suspend joint military exercises for the duration of the Games.

Last week, the North restored the border hotline at Panmunjom after Mr Kim indicated willingness for dialogue during his New Year speech.

Both channels were severed by Pyongyang in February 2016 in protest over Seoul’s shutdown of a joint factory park in Kaesong.

Taekwondo is practised on both sides of the border and it has been a key dimension to the relationship between the two Koreas. North Korea currently leads the International Taekwondo Federation (ITF), which endorses the style of taekwondo practiced in the North, while the South’s style of taekwondo is governed by World Taekwondo (WT), whose standard is accepted by the International Olympic Committee.