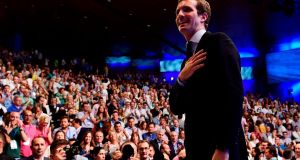 Pablo Casado, the new leader of Spain’s centre-right opposition, has been hit by a growing scandal over how he obtained a masters degree in law, which threatens to derail recent attempts to overhaul the image of the Popular Party.

A magistrate said this week there was evidence that Mr Casado’s 2009 degree from King Juan Carlos University in Madrid was not earned but was in effect a “gift” received because of his political connections.

Mr Casado took the helm of the PP last month promising a “new stage for the party”, which was ousted from government in June in a no-confidence vote in the wake of a party-political corruption case.

The 37-year-old sought to present his leadership as a clean break from the old order, which had been plagued by corruption scandals, while at the same time rallying the core party-faithful by moving to the right on issues such as abortion and immigration.

The Madrid court said Mr Casado’s degree was part of a wider scheme by the university to award masters qualifications to a “chosen group of students” who were picked for reasons other than academic merit and did not have to do the same work as the other pupils.

The case has been sent to the supreme court to consider whether it should proceed to trial because of immunity laws protecting members of parliament in lower courts.

Mr Casado could face charges of cohecho impropio – accepting a gift offered because of a public position, and prevaricación administrativa – facilitating unlawful decisions by civil servants. If found guilty he could face up to seven years in jail.

He has previously admitted he did not attend classes or take the final exams for the masters degree. But he said he did do some work and has denied wrongdoing. He says he did what was asked of him by the university and that he was unaware of any irregularities.

“Under no circumstances have I accepted a gift or requested something that was not given to any other students,” he said this week.

His supporters have dismissed the affair – and its blanket media-coverage – as a politically motivated witch-hunt. Teodoro García Egea, the PP’s secretary-general, said Mr Casado was the victim of political “persecution”.

“This was supposed to be the start of a new era for the Popular Party, but the ‘fake masters’ case puts the public focus back on to legal issues surrounding the party rather than policy,” said Pablo Simón, professor of politics at Madrid’s Carlos III University.

The PP has been hit by a string of scandals in recent years. In April, the head of the Madrid region, Cristina Cifuentes, who was a PP member, resigned after alleged irregularities in obtaining her own masters degree from King Juan Carlos University.

The PP was removed from government two months ago after former senior officials in the party were found guilty of operating a slush fund. The court said the party itself benefited from the scheme, with the court calling it a “profit-seeking participant”.

The scandal led to Socialist leader Pedro Sánchez winning a vote of no-confidence and taking power. The former prime minister Mariano Rajoy quit as PP leader and was replaced by Mr Casado.

According to a poll published last week, the PP has been struggling since being forced from power. The Sociological Research Centre said the Socialist Party was leading the polls with 30 per cent. The PP was in joint second place with the liberal Ciudadanos party on 20 per cent. – Copyright The Financial Times Limited 2018