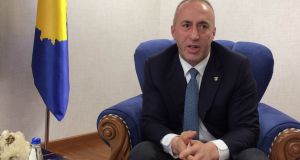 Kosovo’s president Hashim Thaci has proposed a “border adjustment” with Serbia as part of a deal to secure Belgrade’s recognition of his country’s independence, despite warnings that such a move could destabilise the Balkans.

Mounting speculation over the possible terms of an EU-brokered pact to normalise relations between Serbia and Kosovo is unsettling both countries, prompting their leaders to warn of potential “provocations” in recent days.

“My proposal for a peaceful solution with Serbia is clear: no partition along ethnic lines, but yes to the border adjustment and mutual recognition,” Mr Thaci tweeted on Monday.

Mr Thaci did not reveal what changes he had in mind, but he has spoken favourably of calls from politicians in Serbia’s ethnic Albanian majority Presevo Valley to join neighbouring Kosovo.

Kosovo broke away from Belgrade’s rule during a 1998-1999 war between ethnic Albanian separatist rebels and Serbian government forces, and it declared independence in 2008 after nine years of United Nations administration.

Serbia, backed by Russia, refuses to recognise Kosovo’s sovereignty, but the EU says the neighbours must come to terms if they hope to join the bloc.

Mr Thaci’s backing for border changes contradicts Kosovo’s prime minister Ramush Haradinaj, who on Friday said that “no one wants a change of borders, but Russian president Vladimir Putin”, as Moscow seeks more influence in the Balkans.

“No one dares to change the border, or to try to make a correction of the border,” Mr Haradinaj told Kosovo television.

Mr Thaci’s comments also clash with those of Kosovo’s parliamentary speaker, Kadri Veseli, who insisted on Monday that his country “has nothing to give . . . and its territorial integrity is inviolable.”

“Kosovo will join the UN, Nato and the EU with its current borders,” he wrote in an opinion piece for Kosovo media.

Opposition parties and commentators in Kosovo questioned Mr Thaci’s proposal, which Balkan analysts warn could inflame other territorial disputes and embolden Russian meddling in former Yugoslavia, which is still recovering from the wars of the 1990s.

“Exchange of territories between Kosovo and Serbia (now called ‘border correction’) is not a solution. It’s a recipe for long-term disaster. Allowing Vucic-Thaci to redraw maps will condemn the whole Balkans to live the next few decades in conflict,” tweeted Agron Bajrami, editor of Kosovo’s popular Koha Ditore newspaper.

He also wrote a letter to Kosovo Serbs, urging them to ignore “provocations” and pledging that Belgrade would “protect [your] lives and peace, if necessary”.