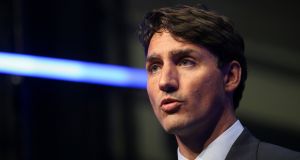 A row over human rights in Saudi Arabia will not have any impact on Saudi oil supplies to Canada, its energy minister said on Thursday, reassuring customers after Riyadh froze new trade with Canada and ruled out mediation efforts.

Canadian prime minister Justin Trudeau appeared to extend an olive branch on Wednesday, saying he would keep pressing Saudi Arabia on civil liberties but also saying the Gulf Arab state had made some progress on human rights.

The Saudi ambassador to Canada said in an interview with al Arabiya television on Thursday that Mr Trudeau’s comments were positive, but more needed to be done.

“There is no doubt that the prime minister’s talk can be described as positive but we are still waiting for more to bridge the gap between the two friendly countries,” Naif bin Bandar al-Sudairi said.

The dispute has threatened to undermine Riyadh’s foreign investment drive, a campaign already unsettled by a series of assertive political and diplomatic initiatives by the top oil exporter.

Saudi Arabia has a “firm and long-standing policy” that petroleum supplies are not influenced by political considerations, Khalid al-Falih said in a statement.

Very alarmed to learn that Samar Badawi, Raif Badawi’s sister, has been imprisoned in Saudi Arabia. Canada stands together with the Badawi family in this difficult time, and we continue to strongly call for the release of both Raif and Samar Badawi.

#Statement | The Canadian position is a grave and unacceptable violation of the Kingdom's laws and procedures. In addition to violate the Kingdom's judiciary and a breach of the principle of #sovereignty.

#Statement | KSA through its history has not and will not accept any form of interfering in the internal affairs of the Kingdom. The KSA considers the Canadian position an attack on the KSA and requires a firm stance to deter who attempts to undermine the sovereignty of the KSA.

#Statement | Using the phrase (immediately release) in the Canadian statement is very unfortunate, reprehensible, and unacceptable in relations between States.

#Statement | We consider the Canadian ambassador to the Kingdom of Saudi Arabia persona non grata and order him to leave within the next 24 hours.

Statement | The KSA announces the freezing of all new trade and investment transactions between the KSA and Canada. The KSA reserves its right to take further action.

#Riyadh | FM @AdelAljubeir: There is no need for mediation.#SaudiArabia did not interfered in the affairs of #Canada in any way. Therefore,
Canada must correct its actions towards the #Kingdom

“The current diplomatic crisis between Saudi Arabia and Canada will not, in any way, impact Saudi Aramco’s relations with its customers in Canada.”

The Financial Times said on Wednesday the Saudi central bank and state pension funds had told their overseas asset managers to sell their Canadian equities, bonds and cash holdings.

A banking source said the Saudi central bank had asked for their bank’s exposure to Canadian assets, but there were no instructions to sell them.

Foreign minister Adel al-Jubeir on Wednesday ruled out any mediation efforts and said the kingdom was considering taking more measures against Canada for interfering in Saudi Arabia’s domestic affairs. He did not elaborate.

When asked whether Canada was prepared to apologise to Saudi Arabia, Mr Trudeau – who in recent years has come under fire for signing off on the sale of more than 900 armoured vehicles to Riyadh – skirted the question. “Canadians have always expected our government to speak strongly and firmly, clearly and politely, about the need to respect human rights around the world. We will continue to do that,” he said.

Saudi Arabia has in recent months detained several women’s rights activists, some of whom had campaigned for the right to drive and an end to the kingdom’s male guardianship system, the latest to be swept up in a government crackdown on dissent.

Since rising to power in 2015, Crown Prince Mohammed bin Salman has courted western allies to support his reform plans to modernise and open up the kingdom, offering billions of dollars in arms sales and promising to fight radicalism in the kingdom.

The 32-year-old de facto ruler has launched a campaign of social and economic change, but has not eased the absolute monarchy’s total ban on political activism. He has taken a more aggressive stance toward arch-rival Iran, begun a three-year-old war in Yemen and led a boycott of fellow Gulf Arab state Qatar. – Reuters

The row with Canada is a sign the prince is willing to risk riling international investors in order to stay in control of the process of change, RBC Capital Markets’ Helima Croft wrote.

“Western governments expressing concerns about human rights issues in the kingdom is nothing new and Saudi authorities have long pushed back against what they characterise as inappropriate interference in their internal affairs,” she said in a note.

But Prince Mohammed is more willing than predecessors to throw caution to the wind, she added, and may be extra sensitive to outside criticism in light of recent challenges implementing his ambitious economic reform agenda. – Reuters