Labour would ‘ensure access’ to single market after Brexit 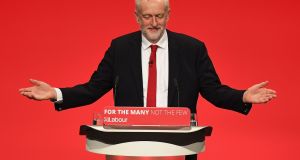 A Labour government would guarantee “unimpeded access” to the European single market after Brexit, Jeremy Corbyn has told his party’s annual conference in Brighton. But the Labour leader did not commit to seeking full membership of the single market beyond a limited transitional period and promised to use “powers returned from Brussels” to support British industry.

Speaking to a packed conference centre, Mr Corbyn was greeted with sustained applause and numerous standing ovations as he ridiculed Theresa May’s government and declared that Labour was ready for power.

“The real divide over Brexit could not be clearer: a shambolic Tory Brexit driving down standards, or a Labour Brexit that puts jobs first. A Brexit for the many, one that guarantees unimpeded access to the single market and establishes a new co-operative relationship with the EU. A Brexit that uses powers returned from Brussels to support a new industrial strategy to upgrade our economy in every region and nation,” he said.

“Never has the national interest been so ill-served on such a vital issue. If there were no other reason for the Tories to go, their self-interested Brexit bungling would be reason enough. So I have a simple message to the cabinet: for Britain’s sake pull yourself together or make way.”

Mr Corbyn said that, although Labour failed to win June’s general election, the gains it made throughout Britain were evidence that the centre of gravity in British politics had shifted.

“We are now the political mainstream. Our manifesto and our policies are popular because that is what most people in our country actually want, not what they’re told they should want,” he said.

The Labour leader described the Grenfell Tower fire as an avoidable human disaster that had left the burnt-out building as a chilling monument to privatisation and inequality. He promised to introduce rent controls in Britain’s cities, to tax undeveloped land held by developers and to introduce compulsory purchase powers.

Facing accusations that he has failed to confront anti-Semitism and online abuse by some of his supporters, Mr Corbyn pointed out that the politician who was the target of most abuse during the last election was shadow home secretary Diane Abbott.

“Yes we will disagree, but there can never be any excuse for any abuse of anybody. We settle our differences with democratic votes and unite around those decisions,” he said.

Accusing the Conservatives of being stuck in a political and economic time warp, Mr Corbyn said that politics was finally catching up with the financial crash of 2008. Promising to go beyond ameliorating the impact of austerity and to transform the economic model, he said democracy around the world faced twin threats.

“One is the emergence of an authoritarian nationalism that is intolerant and belligerent. The second is apparently more benign, but equally insidious. It is that the big decisions should be left to the elite. That political choices can only be marginal and that people are consumers first, and only citizens a distant second,” he said.