French president say that UK ‘may, if it wishes, return to its place’ in Europe 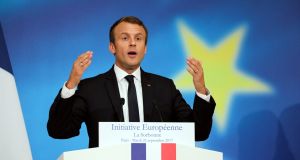 French president Emmanuel Macron delivers his speech at the Sorbonne in Paris. By 2024, he wants every student to speak at least two European languages. Photograph: Ludovic Marin/Reuters

President Emmanuel Macron made an ardent plea for the “refoundation” of the EU in the most daring speech by a French leader on the subject in at least a generation.

Mr Macron’s initiative is likely to thrill European federalists, but will alarm heads of state and government who cling to national prerogatives.

“We can no longer allow ourselves to keep the same policies, the same habits, the same procedures, the same budget,” Mr Macron said. “The only path that ensures our future is the refoundation of a sovereign, united and democratic Europe. ”

Defence was the first of Mr Macron’s “six keys to sovereignty in Europe”. He called for a common intervention force, defence budget and strategy, and asked that a European defence fund be established quickly. He wants a European intelligence academy to fight terrorism, and a European civil defence force to react to natural disasters.

Mr Macron wants a European asylum office to address the continuing migrant crisis. It would harmonise procedures, create a Europe-wide data bank and progressively establish a European border police. He wants the EU to finance training and integration for refugees.

Europe must take the lead in the transition to renewable energy, he said, for example by imposing a dissuasively high carbon tax and promoting “clean” vehicles.

Mr Macron wants “radical European innovation” in digital technology. “Rather than deplore the fact that the Americans and Chinese are digital champions, we must create our own champions,” he said. He condemned the internet giants who “pay no tax and compete with those who do” as “stowaways” in the global economy.

The president wants the euro zone to be “the heart of an integrated Europe”. He wants a finance minister and a parliament for the euro group. The parliament would be comprised of MEPs already elected to the Strasbourg assembly from euro-zone countries.

Mr Macron divulged new detail of his proposal for a euro-zone budget. “European taxes in the digital or environmental fields constitute a true European resource to finance our shared expenditure. Beyond that, we must reflect on assigning a tax to this budget, for example, corporation tax, once it has been harmonised.”

The French leader wants to create a corporate tax “corridor” with minimum and maximum rates in the 2020 EU budget. Countries which failed to comply would no longer be eligible for EU cohesion funds.

In an apparent allusion to the European Commission’s attempt to force Apple to pay €13 billion in back taxes to Ireland, Mr Macron said he “saluted” the competition and finance commissioners, Margarethe Vestager and Pierre Moscovici. They had “started moving, and pushing certain actors and certain countries”, he said. “We must go farther. We cannot allow structural funds to finance lower corporate tax rates. That is Europe backwards.”

Mr Macron said the EU must guarantee a minimum wage for all Europeans, “adapted to the economic reality of every country”, and prevent competition through different levels of social contributions.

Culture and knowledge “will always be the strongest cement of the union”, Mr Macron said. By 2024, he wants half of all European youths to have spent at least six months in another EU country, and he wants every student to speak at least two European languages. He wants to create European universities to rival the US Ivy League.

To make Europe more democratic, Mr Macron repeated the proposal he made in Athens earlier this month, that 73 former British seats in the European Parliament be filled through Europe-wide lists in the 2019 elections. He wants half of all seats to be filled the same way in the 2024 elections.

Mr Macron wants France’s European partners to begin volunteering immediately to participate in “the group of European refoundation”. Those countries who wish to will hold “democratic conventions” over the first six months of 2018 to consult their populations on their priorities for Europe.

Mr Macron had waited until Sunday’s German election to unveil his proposals. Chancellor Angela Merkel may take months to form her government, but in the meantime he proposes a revamped version of the 1963 Franco-German Élysée Treaty to celebrate its 55th birthday next January 22nd. He calls for “total integration” of French and German markets, under the same business law, from 2024.

“The UK may, if it wishes, return to its place [in Europe],” Mr Macron said. “In the rethought and simplified EU that I am proposing, I cannot imagine that the UK would not feel at ease.”

Multispeed Europe is already a fact, Mr Macron said. “Let us go towards this avant-garde, this heart of Europe. Faced with great challenges, we must speed up as we go forward, while raising our level of ambition. No state must be excluded from this dynamic, but no country should be allowed to block those who want to go farther or faster.”