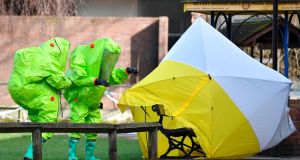 Members of the emergency services afix a tent over the bench where Sergei Skripal was found in a critical condition at The Maltings shopping centre in Salisbury, southern England. File photograph: Ben Stansall/AFP/Getty Images

The nerve agent used to attack Russian former double agent Sergei Skripal and his daughter was delivered in a “liquid form”, the British department for environment, food and rural affairs (Defra) has said.

Only a “very small amount” of the deadly Novichok substance was used against Mr Skripal (66), and 33-year-old Yulia, it is understood.

The highest concentration of the substance was found at Mr Skripal’s home on the outskirts of Salisbury, with eight other areas across the city potentially contaminated.

Further details about the substance emerged at a press briefing on Tuesday.

A spokesman for Defra said: “In this instance, direct contact is required for a person to be poisoned. Only a small proportion of the material is transferred in each contact and the substance is diluted in each secondary or tertiary contact.

“The class of nerve agent does not produce significant vapour or gas and can only be moved between sites by direct transfer from a contaminated person or by moving a contaminated item.”

Asked what form the nerve agent was in, the Defra spokesman said: “It’s in a liquid form.”

It comes as the first of 10 sites cordoned off across the city following the attack was reopened to the public on Tuesday.

Tests confirmed the site at London Road Cemetery, which contains the remains of Mr Skripal’s wife and son, was not contaminated.

Meanwhile, work is set to begin to decontaminate the nine other locations experts either know or believe are contaminated.

A multimillion-pound clean-up operation, involving about 190 specialist military personnel, is expected to start in the coming days, with the process lasting months.

It will first focus on two areas near Bourne Hill police station and two ambulance stations, before work starts on The Maltings area — where the Skripals were found — including a Zizzi restaurant, a car compound and the home of poisoned police officer Nick Bailey.

The Mill pub and Mr Skripal’s home, which are still part of the police investigation, will be the last to be cleaned.

Residents have been warned to expect to see more activity in the city as cordons are replaced with secure fencing and specialists wearing protective suits begin work to remove items and begin the chemical cleaning process.

Public Health England assured locals the risk to the general public remains low and that Salisbury remains safe for visitors and residents. No further cases of poisoning have been reported since the day of the attack, March 4th.

Defra’s chief scientific adviser Ian Boyd said: “Thanks to detailed information gathered during the police’s investigation, and our scientific understanding of how the agent works and is spread, we have been able to categorise the likely level of contamination at each site and are drawing up a tailored plan.

“Meticulous work is required and we expect it will be a number of months before all sites are fully reopened.” – PA