Skripal poisoning suspects’ explanation does not add up 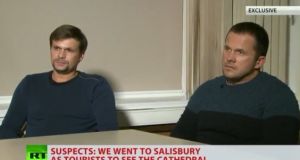 Ruslan Boshirov and Alexander Petrov: accounts of their movements around Salisbury in March appear inconsistent. 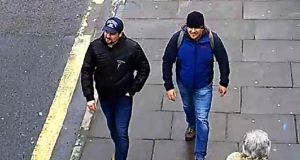 Ruslan Boshirov and Alexander Petrov on Fisherton Road, Salisbury at 1.05pm on March 4th: they are the main suspects in the Salisbury Novichok poisoning cases.

The explanation offered on Russian television on Thursday by the men known as Ruslan Boshirov and Alexander Petrov for their trip to London and Salisbury throws up as many questions as answers.

The men – leading suspects in the poisoning of former Russian spy Sergei Skripal and his daughter Yulia – say they were so keen to visit Salisbury cathedral that they travelled to the city on two consecutive days.

On Saturday, March 3rd – which the British authorities claim was the date of a reconnaissance mission – they got to Salisbury train station but say they were driven back by snow, even though local newspaper pictures show people going about their business with little difficulty. They were less than a mile from the cathedral – perhaps a 12-minute walk – but say they could not get there that day.

The next day they accept they may have been close to the house of Sergei Skripal at the time his home was sabotaged with nerve agent, although his address is about 3km from the cathedral – their supposed destination in Salisbury and nowhere near other attractions they say they were interested in, including Old Sarum and Stonehenge.

Why do Boshirov and Petrov say they were in the UK?

They claim they were in the UK for pleasure rather than business. They arrived on Friday, March 2nd, and say the UK was gripped by transport chaos. That is true – Storm Emma had met the so-called Beast from the East, causing a blast of heavy snow. More than 1,900 flights to or from UK and Irish airports were cancelled. In Wiltshire, a major incident was declared.

Why do they say they decided to visit Salisbury?

Petrov said their friends had been suggesting for a while that they visit the “wonderful” city of Salisbury. The pair said the initial plan had been to make a day trip. “One day in Salisbury is enough. There’s not much you can do there,” said Petrov. “It’s a regular city. A regular tourist city,” said Boshirov.

What do we know of their movements on Saturday, March 3rd?

The British authorities have said the pair left their hotel in east London and arrived at Waterloo station in the capital at 11.45am, where they caught a train to Salisbury and arrived at about 2.25pm. They were in Salisbury for just under two hours, leaving at about 4.10pm. Why such a short stay?

Petrov said the pair had planned to visit not only the cathedral but Stonehenge and the ancient settlement of Old Sarum, which is north of the city centre.

“We wanted to walk around the city but since the whole city was covered with snow, we spent only 30 minutes there,” said Petrov. “We were all wet.” He added: “It didn’t work out because of the slush. The whole city was covered with slush.” Petrov said they returned to the station and spent about 40 minutes there drinking coffee in the station cafe. “We were drenched up to our knees,” added Boshirov.

The account makes little sense. The cathedral is only 1.2km from the train station – a walk of about 15 minutes. They could easily have strolled there in the half hour they said they spent there. There was snow on the ground but people were going about their business.

The Salisbury Journal’s live blog showed that by the time the pair were there, the snow on city centre pavements was sparse.

So where were they if they couldn’t make it to the cathedral?

British counter terrorism police have said they believe the March 3rd visit was a reconnaissance mission. But the police have only released one image from Salisbury on the Saturday – the men at 4.11pm at the railway station, about to return to London. No images or timeline have been issued of the men’s movements around Salisbury that day. The British police have not said if they were seen near the Skripal house.

They seem well-informed about the cathedral?

Petrov takes the lead on his description of the cathedral: “It’s famous throughout Europe and, in fact, throughout the world, I think. It’s famous for its 123m spire. It’s famous for its clock. It’s the oldest working clock in the world.” He later refers to it as the “cathedral of the blessed Virgin Mary”. The phrase is a little clunky and is not commonly used in modern-day Salisbury.

But Wikipedia does use the phrase and gives details about the spire and clock.

Why do Boshirov and Petrov say they returned on Sunday, March 4th?

Where else do they claim they went?

They say they visited a park and coffee shop. Mention of a park will prick up the ears of security officials – and Salisbury citizens.

A city centre park, Queen Elizabeth Gardens, was cordoned off and searched after Charlie Rowley and Dawn Sturgess were poisoned with Novichok. The pair had been in the park the day before they fell ill. Police have said they do not know where the pair dumped the Novichok used in the attack on Sergei Skripal’s home.

Does the Russians’ account tally with what British police have said?

According to the UK authorities, after arriving in Salisbury at 11.48am on March 4th, the men did not go straight to the city centre or the cathedral. They should have turned right into the city if they were on the tourist trail. Instead they turned left and walked directly to the residential area northwest of the city where Skripal lived. They were caught at 11.58am by a CCTV camera at a Shell petrol station on Wilton Road. On the opposite side of the road is a tree-lined path that leads up to the Skripal house on Christie Miller Road. If they went straight to the house and carried out the attack, they would have been at the Skripal front door shortly after noon.

What did they they say about the Skripal home. Did they go close to it?

“Maybe. We don’t know,” said Petrov. “Maybe we passed it, or maybe we didn’t,” said his colleague. There is no reason for them to be anywhere near it – it is 3km northwest of the cathedral.

What did the pair do next?

About an hour after the attack, at 1.05pm, they were in the city centre on Fisherton Street, according to the British authorities. The police have not given details of how they got there. At this point they were within a few minutes’ walk of the cathedral. There is a gap of about 40 minutes in the timeline the police have provided between when the pair were seen in Fisherton Street and when CCTV footage picked them up at the station at 1.50pm on their way back to London.

Why spend so little time in Salisbury? Again they say they were put off by the snow. “There was heavy rain with snow . . . so we left early,” said Petrov. If they were so keen to get to Stonehenge, they could have made it. At 9.39am English Heritage was tweeting: “We’re looking forward to giving all our visitors a warm welcome to Stonehenge today. We’re open until 5pm with last tickets at 3pm.” – Guardian